The students completed SFSC’s two-year registered nurse program and will soon sit for the national board examinations, aiming to start their careers later this summer.

The freshly minted nurses, all clad in white uniforms, sat shoulder to shoulder on the stage of SFSC’s Theatre for the Performing Arts, with scores of family, friends, and well-wishers looking on from the audience.

Tonya Chancey, director of nursing at Next Generation Village Advanced Recovery Systems, took to the lectern to address the graduates and share her experience of a life in nursing.

Chancey, a former professor of nursing at SFSC, told the students they were entering a profession where service and dedication were not just bywords but the very essence of their calling. 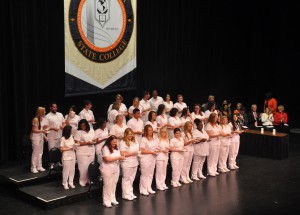 She recalled the words of famed children’s advocate Marian Wright Edelman: “Service is the rent we pay for being. It is the very purpose of life, and not something you do in your spare time.”

Alysha Sargent, class president, recalled the ups and downs of the students’ two-year pursuit of their degree, noting that they all had to sacrifice and lean on loved ones to earn the opportunity to take their seat on the theater’s stage that night.

But before the class could take its turn observing ceremonies stretching back to the 19 century, they had an award of their own to confer. The class tapped Diorelly Marquez-Lopez, a nursing instructor at SFSC, as the recipient of the Golden Duck award. Each graduating class of SFSC nursing students gives the award to a person who contributes in a special way to their learning and development as a nurse. The award’s significance is based on the D.U.C.K. motto: Developing, Understanding, Compassion, and Knowledge.

Continuing a custom initiated by Florence Nightingale, recognized as the founder of modern nursing, the graduating students received their nursing pins, as a symbol of their hard work and achievement. In contemporary graduation ceremonies, students accept their nursing pins from a person of their choice, in most cases a relative, who they see as a pillar of support in their lives.

The graduates, with the lapels of their uniforms now carrying their pins, then clasped a white lantern, which each graduate lighted in succession. This tradition, a rite of passage also initiated by Nightingale, signifies the courage, compassion, selflessness each new nurse is called to, Dr. Michelle Heston, SFSC’s nursing program director, told the assembly.

“These unique values are yours now to pass along to your colleagues, but more important, to your patients,” Dr. Heston said.

Then, in unison, the graduates recited the Nightingale pledge, a nurse’s commitment of devotion to the welfare of the patient under his or her care.

Traditions observed, ceremonies complete, and few wet eyes in need of a tissue, the new nurses filed off the stage into the audience to greet their loved ones.