Original Stars of American Bandstand Perform at the Wildstein Center 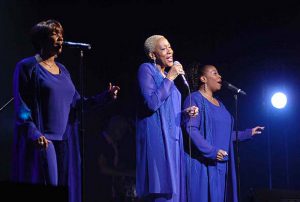 In 1959, Dick Clark had an idea to package rock and roll concert tours. He proceeded to load up buses full of the brightest stars and a generation’s greatest songs and take the show on the road. The Original Stars of American Bandstand, who defined a generation with their music, are back on the bus slated to perform one show on Thursday, Jan. 18 at 7 p.m., at the Alan Jay Wildstein Center for the Performing Arts at SFSC. Tickets are $35 – $50. The Original Stars of American Bandstand is sponsored by Heartland National Bank.

“This is not a tribute show,” said Tommy Vee, who produces the show. “Audiences across the country are thrilled to see Shirley Alston Reeves, The Chiffons, Brian Hyland, Chris Montez, and Merrilee Rush perform their chart-topping hits.”

Rock and Roll Hall of Famer Shirley Altson Reeves was born Shirley Owens in Henderson, N.C. and moved to Passaic, N.J., at an early age. While attending Passaic High School, she co-founded The Shirelles and sang lead vocals for the group. The Shirelles were discovered by Florence Greenberg, owner of Tiara Records, after performing in a talent show at Passaic High School. The Shirelles soon became known throughout the world when they placed six singles in the Top 10, and their songs. “Tonight’s the Night,” “Soldier Boy,” “Dedicated to the One I Love,” and “Will You Still Love Me Tomorrow?” have become classics and have since been covered by many artists.

Born in Queens, N.Y., Brian Hyland sky rocketed to the top of the charts in 1960 reaching No. 1 with the classic novelty song, “Itsy Bitsy Teenie Weenie Yellow Polka Dot Bikini.”  At the age of 17, his prolific career was launched, and his next hit was “Sealed With A Kiss,” one of the most memorable summertime ballads of all time. His collaboration with Del Shannon gave him his biggest success with “Gypsy Woman.”

The Chiffons were an all-girl group from the Bronx whose first single, “He’s So Fine,” shot to No. 1 in the United States, and they were awarded a certified gold record for selling over one million copies. Other hits, “One Fine Day,” “Sweet Talking Guy,” and “I Have a Boyfriend” soon followed and, in 1964, The Chiffons opened for both The Beatles and The Rolling Stones. Merrilee Rush, who was nominated for a Female Pop Vocalist of the Year Grammy Award for her recording “Angel of the Morning,” hails from Seattle, Wash. She appeared on numerous television programs in the 1960s and 1970s, including “American Bandstand,” “The Joey Bishop Show,” “Happening,” “The Glen Campbell Goodtime Hour,” and “The Everly Brothers Show.” Rush’s recording of “Angel of the Morning” was featured prominently in the film, “Girl, Interrupted,” for which Angelina Jolie won an Academy Award. “Angel of the Morning” has also been featured in the major motion pictures “Jerry Maguire” and “Fingers.”

The SFSC Box Office, located on the Highlands Campus in Avon Park at 600 West College Drive, is open Monday through Friday, 11:30 a.m. – 2:30 p.m. Tickets and videos of upcoming productions are online at sfscarts.org. Telephone orders are available by calling 863-784-7178.