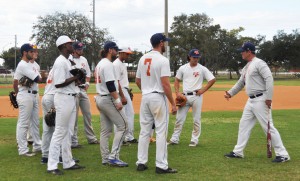 Coach Rick Hitt (far right) on Panther Field with his players during an afternoon practice.

Both teams kick off the season at home on the Panther athletic fields at the SFSC Highlands Campus in Avon Park.

“We’re coming off a solid fall season and are ready to play ball again,” said SFSC baseball coach and athletic director Rick Hitt. “We had a lot good days in the fall with plenty of opportunities for the players to improve themselves and solidify a positon on the spring roster.”

“All the players, new and returning, showed great effort level during the fall and I’m pleased with where we are as we open the season,” Hitt said.

Hitt will coach his 19th year at SFSC, and his 29th season overall. In recognition of his dedication to student athletics, Hitt was inducted into the Florida College System Activities Association (FCSAA) Hall of Fame in 2015 on the recommendation of athletic directors and coaches from across the state.

In preparation for the season opening, a recent practice session saw Hitt throwing pitches to the players from behind a netted screen, bellowing out instructions, advice, and encouragement.

“We work very hard on the details,” Hitt said. “We concentrate on the little things a lot.”

This season marks the second year baseball teams play the flat seam baseball, introduced by the National Junior College Athletic Association to inject more offense into the game, doing away with the high seam baseball.

“The flat seam ball has definitely added some pop into the game offensively,” Hitt noted. A sentiment he said many other coaches voiced while at a recent national conference.

The opening game has the Panthers take on the Titans of Eastern Florida State College. The Titans went 33-19 last season, ranking seventh in the NJCAA Region 8 Baseball Coaches’ Poll.

This year, Hitt is assisted by Mark Ward, a former assistant coach at Indian River State College. “Mark teaches at Okeechobee High School and his dedication to our team shows in his driving an hour and half to and from each practice and game,” Hitt said of his new assistant coach.

Conference play starts for Panther baseball March 1, when they travel to Bradenton to play the Manatees of State College of Florida, Manatee-Sarasota.

On opening day, fans of Panther athletics can also take in a softball game when coach Carlos Falla leads the Lady Panthers as they go up against Palm Beach State College.

Falla, now in his 13th year coaching at SFSC, will lead an experienced team. The Lady Panthers return 11 sophomores to the field this season, with nine first year students making the roster.

“We have a fair amount of potential this year,” said Falla. “They’re out there every day working hard and trying to get better.”

The team finished its last season with overall record of 24-25, winning 17 of its games at home.

Falla added, “The approach means working with players to correct things between pitches instead of between innings.”

In their opening game, the Lady Panthers of SFSC face off against the Palm Beach State College Panthers, who went 17-37 overall last season.

Amanda Byers returns for her second year as assistant coach to the Lady Panthers. “Amanda is an amazing assistant who shows true dedication to the players,” Falla said of Byers, an SFSC alumna who played under him. “She hammers home the basics, both on and off the field, with an emphasis on academics.

The Lady Panthers don’t start conference play until March 7, when they go up against Hillsborough Community College.

“We invite everyone out to the ball park this season to see great baseball and softball,” Hitt said. “Folks shouldn’t forget that admission to all games is free.”

Hitt had a message for everyone at SFSC.

“We can’t say enough about the support we get from the campus and the community,” he said. “We just want to thank everyone for their support.”