AVON PARK, Fla. – Feb. 13, 2017 – In early February, Paul Blackman had just wrapped up his first month as Highlands County’s new sheriff. Sitting in his office, Blackman took a moment to reflect on the journey that placed him atop the county’s law enforcement community. 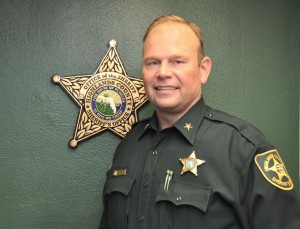 As it happens, Blackman said that seven out of 10 voters who swept him into office can tip their hats to SFSC baseball and a Panther cheerleader for the chance to choose him as their sheriff.

“I was a kid just out of high school in Saint Augustine, and SFSC baseball coach Clay Gooch offered me a scholarship to come to Avon Park to pitch for the college,” Blackman said. “One day the team was parading through the cafeteria, and the cheerleaders were on hand rating each of us on our looks.”

Whatever his rating might have been, one of those cheerleaders took a shine to the new pitcher. The two started dating. “It might sound goofy, but Melissa and I have been together ever since,” Blackman said of his wife. The couple will shortly celebrate their wedding anniversary, having wed on the shores of Lake Jackson 26 years ago.

Blackman came to SFSC with dreams of moving up to the major leagues. He picked up his love for the game from his grandfather, Paul Gillespie, who played catcher for the Chicago Cubs in 1945, the last time they were in the World Series before their championship win last year.

“Back in high school, I thought I had a decent arm and would go on to the big leagues,” Blackman recalled. “But after two days at SFSC, it dawned on me I was just one fish in a big pond.” Still, Blackman finished out a season and a half before transferring to Warner University, where he played for another season.

“Melissa said if I loved her I would have to love Highlands as well, because she wasn’t moving away,” Blackman said. “Her dad was a deputy with the Highland County Sheriff’s Office. I went out with him on some calls, and I got an angling for law enforcement from hanging around him and his buddies.”

In 1992, Blackman returned to SFSC and put himself through the college’s Criminal Justice Academy.

“Then-Sheriff Godwin gave me a chance, and I started as a deputy in 1993,” Blackman said. “Through the years, I’ve worked in every position at Sheriff’s Office.”

Blackman realized his career advancement in law enforcement would require a college degree. He returned to SFSC to pick up the credits he needed for an associate degree and other, not so easily measured, benefits.

“It’s only years later that I can look back and realize what an impact the folks at SFSC had on my life,” Blackman said. “I think of Coach Gooch, and Jack Parr, a counselor during my time on the Highlands Campus, who took an interest in giving me guidance that made a big difference.”

Blackman said he shares those memories with his son, Gerig, who is midway through his first year at SFSC, where, like his father, he pitches for the Panthers.

“I try to pass them along to my son by telling him to build relationships with his mentors at SFSC, folks like Coach Hitt and his instructors, whose influences now will make a difference later on in his life.”

Melissa Blackman, the former SFSC cheerleader who eyed the young pitcher, has risen through the ranks of the Highlands County School Board, recently assuming the post of assistant superintendent for curriculum and instruction.

The couple, along with their son, love the beach, where they enjoy surfing as a family at Fort Pierce State Park.

Blackman returned recently to Panther Field early on a sunny afternoon to throw out the season opening first pitch when SFSC faced off against Eastern Florida State College. On hand to take in the game was Clay Gooch, the SFSC coach who brought Blackman to Highlands County.

“After I threw out the first pitch, Coach Gooch came up to me and said ‘Why didn’t you throw the ball that hard when you played for me?’,” Blackman said. “That’s typical Coach Gooch, who is another great SFSC influence who has been so important to me.”

Blackman will soon move to a new desk when the Sherriff’s Office moves to its new headquarters down the street. He has filled out the command structure of his office and said his major challenge has been finding time to accommodate all the requests from the many people who seek him out.

Describing himself as a man of faith, Blackman sees his role as that of a servant leader, an approach to public service that emphasize the role of the leader as one committed to serving others. But while faith plays a central role in Blackman’s life, he recognizes the complementary role education plays.

“I am hopeful that through my education at SFSC, I’ve been prepared to be a great leader at the Highlands County Sheriff’s Office.”