With families, fellow students, and college administrators looking on, the students recited an oath of membership, joining the honor society that recognizes distinguished academic achievement by students in two-year academic programs.

Dr. Sidney Valentine, SFSC vice president of academic affairs and student services, served as the guest speaker. He opened by praising the students for making the decision to succeed. “Here you are, arguably the best students at SFSC academically, and if you think about how you got here, you…prioritized your goals and dove into the details, one thing at a time for however long it was going to take. By being inducted into PTK this evening, and placing that on your resume, a hiring manager is going to see that and immediately think, ‘This shows me that this individual has the drive and intellectual ability to succeed.” 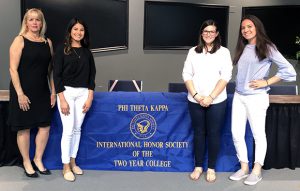 Dr. Valentine went on to discuss the challenges of being a leader. “As you grow as future leaders, creating positive change will not be an easy undertaking,” he said. “You will recognize needed changes and improvements, and if you are not willing to live by the status quo of ‘It’s always been done that way,’ you will most likely take people that are living with the status quo way outside of their comfort zone. When you can do that, you can change the world. Never settle just because it seems like the mountain is too high or the current is too rough.”

As the ceremony drew to a close, each inductee stepped forward to sign the honor society’s membership book and record their status as a scholar of distinction at SFSC. As the auditorium lights dimmed, the scholars each lit a candle to signify their fellowship in the society.

PTK is an honor society that recognizes the academic achievements of community and state college students and helps them to grow as scholars and leaders. The society is made up of over 3.5 million members and nearly 1,300 chapters in nine nations. In 2018, PTK celebrated its 100th anniversary. For more on PTK, visit ptk.org.