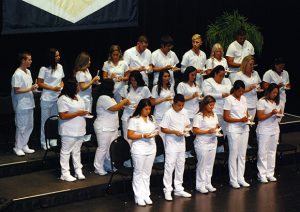 The graduates lit lanterns during the traditional candle lighting ceremony.

AVON PARK, Fla. – July 31, 2017 – On July 27, South Florida State College graduated a class of 23 practical nurses in a traditional pinning ceremony in the Wildstein Center for the Performing Arts at SFSC’s Highlands Campus in Avon Park.

The class treasurer, Vanessa Olivero, introduced guest speaker, Barbara Kurtz. Kurtz, served as an instructor during the early stages of SFSC’s Nursing Program in the 1970s and later became its director. Kurtz told of her experiences starting and growing a nursing program at the college.

Adam Rodriguez, class president, said in his farewell address: “I encourage you, my fellow graduates, to continue to fight and be the conquerors that you are, to reach your goals in your careers. Be the light of hope in the midst of darkness and despair, stand up for the weak and defenseless. I am honored and humbled to be counted among you. Let’s be the nurses we were called to be!”

Each class of nursing graduates awards the Golden Duck Award to a nurse who has served as a mentor, guiding them through to graduation. The D.U.C.K. acronym represents the foundational elements of the mentoring arrangement: Developing, Understanding, Compassion, and Knowledge.

“She made our experience in the obstetrics department fun filled and amazing, which I know all of us will never forget. She is an excellent teacher, and we will always be grateful for her willingness to give of herself.”

During the ceremony, the graduates accepted their nursing pins from spouses, parents, and their children. Mary von Merveldt, director of the SFSC Nursing Education program, introduced each person presenting their loved one with the pin, reading words of thanks written by each graduate.

In addition to its 11-month Practical Nursing program (to become licensed practical nurses), SFSC offers an Associate Degree in Nursing Degree (ADN) program for students interested in becoming registered nurses, a one-year Transition-LPN to RN program, and a Bachelor of Science in Nursing (BSN) program.