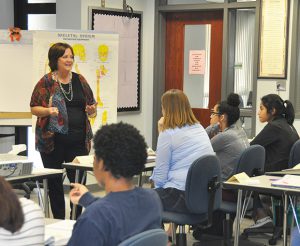 Kinser in the classroom

AVON PARK, Fla. – Feb. 7, 2019 – Cindy Kinser, professor in South Florida State College’s (SFSC) medical administrative specialist program and chair of the Department of Business and Information Technology, wanted to be an interior designer. But advice from her mother and a life in health services offered paths to a new love and a rewarding career—teaching.

“I didn’t want to go into the medical field,” Kinser said. “It was always my goal to go into interior design. But my mom talked me out of it. She said, ‘You’ll always have a job in a medical career, and she was right.’”

Kinser was born in Luck, a town in northern Wisconsin with a population of 500. She was 12 years old when her family moved to Miramar, Fla.

“We were very poor,” she said. “My mom was a single mother, and I wanted to help her financially. So I helped bag groceries and such growing up. I’m proud to have done it.”

At age 16, Kinser was offered a job that would start her path in the health care field. She heard about a job at a 50-bed hospital in Miami. To accept the position, she would have to take a $1.50 an hour pay cut from her job at Publix.

So Kinser worked at the hospital through high school. After school, she would drive her Volkswagen down the expressway to Miami, work until 7 p.m., come home, do her homework, and then do it again the next day.

In time, Kinser became an assistant director of the medical record department at a 350-bed Humana hospital in Fort Lauderdale and, later, director of case management at Raulerson Hospital in Okeechobee, Fla.

Kinser came to SFSC in January 2010. In the classroom, she uses her career experience to prepare students for critical moments—what she calls her “Cindy stories.” A critical moment of which Kinser is particularly proud was coordination of Raulerson Hospital’s evacuation during the approach of Hurricane Frances in 2004.

“Hurricane Frances was expected to come right across Okeechobee,” Kinser said. “The hospital building wasn’t made of concrete block, and we were only two miles from the Lake Okeechobee dike. My husband was the director of engineering at the hospital, and he was concerned that the building wouldn’t bear up against the hurricane-force winds. So I went to the administrator and director of nursing and asked if we needed to evacuate.”

Administrators decided to evacuate the hospital. Along with the director of nursing, the nursing supervisors, and case management staff, Kinser coordinated the evacuation of 87 patients out of the hospital in less than 72 hours.

“We started evacuation with ICU,” Kinser said. “We were only a 101-bed hospital. So, we sent some patients to Tampa General and several hospitals in the Tampa area and Lakeland. When the winds got too high, the ambulances stopped running. So, we had to call in the National Guard, and they helped us get the last few patients out. I remember wind and rain coming into the ER.

“It was a huge coordination process,” she said. “We were moving people who weren’t well, some of whom were on life support. It was a team effort.”

Much of what she teaches students is how to handle emergencies and poses questions such as: “If someone who calls the doctor’s office is short of breath and can’t talk, they should call 911. But they’re 82 years old and called you because you’re a friend at the doctor’s office. Older people depend on the office staff. What do you do?”

Another student may say, “Maybe I should call 911 for them.” Kinser would respond, “But is someone else with the patient? Have you asked them that?”

“I’ll tell the students to think about how to handle those emergencies,” she said. “Are you going to hang up after you’ve called 911? No, you’re going to call 911 on one line and keep Bertha on the other line. Her husband may have dementia, so he can’t help her. You’re going to stay on the phone until 911 gets there, then you can hang up the phone. They may be so short of breath, they can barely speak.”

As a professor, Kinser feels particularly rewarded when she can make a difference in her students’ lives.

“Last summer, a student came to me and said, ‘Because of you, I went on to the Associate in Science in Nursing program, and I’m getting ready to sit for my national licensure exam. I wanted to thank you for everything you did. You inspired me to go forward in my career.’

Many of Kinser’s students come to her through the Collegiate High School at SFSC. Occasionally, Kinser will encounter students who may not be engaged in class work. “Sometimes, the high school students can be challenging. They’re with you today and not tomorrow. Some of them have a lot going on at home that affects their college work.”

To inspire them, she keeps a video on hand to play in class that’s in your face and asks the question: “Are you average or are you above average?” “The star of this 4-minute video is a former rapper, and the students can really relate,” she said.

“After watching it one day, I went around the class and asked, ‘Are you average or are you above average? And where are you going? Where do you see yourself in five years?”

“One of my students just broke down and sobbed. She said, ‘I’m the only one to finish high school in my entire family, and I want to show my little sister that she needs to do that. I’m sorry. I’ve been less than average in your class.’ But the class discussion just lit her on fire, so much so that she was eventually accepted to Bethune-Cookman University’s nursing program. She was so proud of herself. That little video made the biggest difference in her attitude, and I’m so proud of her.”

For Kinser, teaching is about being there for her students. “Sometimes we just have to get our students back on track again and be a good listener. That’s the most rewarding part of my job—when I can make a difference in someone’s life. Sometimes a student just needs someone to listen to them and give them encouragement.”