He retired after three decades of practicing internal medicine, growing weary of the business–end of medicine. Still, he couldn’t imagine a life on the links or lounging by the pool. He had a need to work.

“I am going to keep working until I drop,” said Dr. McConnell from his office on SFSC’s Highlands Campus. “As long as I am useful, I’ll keep teaching here.”

His journey to SFSC’s science classrooms came about from a knock on the door. “After leaving my practice, I took up piano lessons to keep myself engaged and busy,” Dr. McConnell said. But after several year of lessons, he acknowledged “I didn’t have it in me to play music.”

Thinking he might have an aptitude for art and eager to find something to do, he knocked on the door of SFSC art professor Cathy Futral. “I never did art before, so I asked Cathy if I could audit her drawing class.”

Futral said she advised him to start with a basic drawing class, which he did.

“As you might imagine, combining the scientific mind with his keen perceptual skills, the artistic talents of Dr. McConnell took off,” Futral said. “Students —and his teacher—were inspired and impressed by his technically beautiful and well-crafted creations.”

Indeed, visitors to Dr. McConnell’s office will find several large renderings of detailed, expertly crafted drawings of anatomical subjects that appear to be reproductions from Gray’s Anatomy, the iconic century and half old textbook on human anatomy.

“No, they are all my drawings,” Dr. McConnell observed. “I don’t exhibit them at shows or sell them. I do the drawings for my own pleasure.” He also draws portraits and paints with acrylics.

Dr. McConnell was so taken by drawing that he hoped he might land a position teaching at SFSC. A move—he hoped—that would keep him busy. But he said the department was already fully staffed. Then came word of an opening for a part-time anatomy instructor at the college.

“It was a perfect fit me,” he said. “I had taught anatomy during the summers while wrapping up my medical studies.” 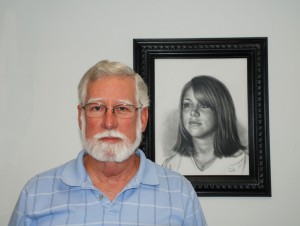 Dr. Christopher McConnell in his office with one of his portrait drawings.

Dr. McConnell was born in a U.S. Army hospital outside of Detroit, where his father was stationed during World War II. In short order, the family moved to St. Petersburg, Fla. He completed his undergraduate work at the University of South Florida in three years and earned acceptance to Emory University’s medical school.

Dr. McConnell specialized in hematology and oncology. He returned to St. Petersburg, where he practiced for the next 30 years.

“I worked at a large clinic and left when it was sold to a corporation,” he said. “I moved to a 20-acre spread in Wauchula and commuted back to the coast for two years where I worked at the Veterans Administration hospital.” Then came retirement.

Ever needing something to keep him busy, Dr. McConnell raised fainting goats. “Yes, they are goats that faint when startled,” he said. He explained the goats have a genetic disorder that causes their muscles to stiffen when they feel panicked. “It’s painless and they recover in a few seconds,” he explained.

But caring for fainting goats and doing art wasn’t enough to keep him occupied. After one year of teaching anatomy part-time, he was hired to teach full-time, much to his delight. “You can’t go from being a busy doctor to doing nothing,” Dr. McConnell said.

He carries a full load of classes, even commuting two days each week to SFSC’s Lake Placid Center to teach.

Dr. McConnell is experimenting with a novel instructional approach that requires extra work on his part, which is fine with him. “This academic term, I am using the flipped classroom,” he said. “Rather than lecture, I use class time to quiz the students and guide them through in-class exercises.”

Students go online before the class to watch a recorded lecture Dr. McConnell would otherwise have given during class. “This approach engages the student in a much better fashion,” he noted.

Work is not the only thing that fascinates him. He reports a happy marriage to Lisa McConnell, a nursing instructor at SFSC.

“I still draw but not as much now that I have a full teaching load and do the flipped classroom,” Dr. McConnell said.

Full load or not, Dr. McConnell says he could still do more.

“I’d teach more classes if they let me,” he said.