Students, their families, and SFSC administrators were on hand as 50 students recited in unison the Phi Theta Kappa Honor Society oath of membership, joining the international honor society that recognizes distinguished academic achievement by students in two-year academic programs. 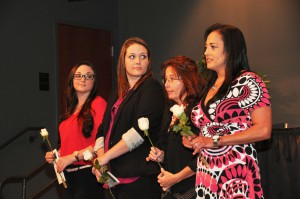 Students completing their four-year degree programs were inducted into the International Society of Baccalaureate Scholars. In all, 10 students who are wrapping up their bachelor’s degree coursework took the oath of membership in the ISBS.

J.J. Moye, a professor of mathematics at SFSC, served as the guest speaker. In his remarks he encouraged students to rethink the common notions of success. Rather than measure their success by everyday measures, Moye, a PTK member from his undergraduate days at SFSC, exhorted the students to look instead at what brings them a sense of personal accomplishment.

As the ceremony drew to close, the inductees stepped to a candlelit table upon which lay each honor society’s membership book. One by one, they affixed their signatures in the books, recording their status as scholars of distinction at SFSC.