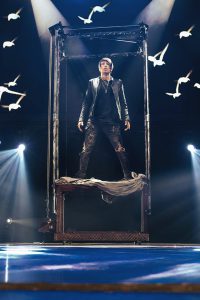 AVON PARK, Fla. – Jan. 15, 2021 – Reza is recognized as one of today’s most sought after entertainers in the touring illusion industry, delivering innovative, engaging, and spectacular performances worldwide. Reza, who will perform on Sunday, Jan. 24 at 3 p.m. and 7 p.m. at the Alan Jay Wildstein Center for the Performing Arts at South Florida State College (SFSC) in Avon Park, has taken the art of illusion to a new level, performing his rock-concert style magic show to audiences across the globe. Young and fresh, Reza’s new show, “Edge of Illusion,” has earned various awards including “Magician of the Year.”

Reza’s recent tour and television appearances have astounded over 30 million viewers from across the world on networks such as MTV, A&E, The CW, PBS, and Telemundo as well as live venues including the Alamodome (San Antonio), Philips Arena (Atlanta), Villanova Pavilion (Philadelphia), and Mundo Imperial Forum (Acapulco), to name a few. Reza’s new show, “Edge of Illusion,” is a ground-breaking grand scale production which Reza simultaneously designed to connect with the audience.

Reza began making his presence felt in the world of illusion at a young age. His focus in the art began at the age of 7 after being inspired by a magic show in his hometown of Brookings, S.D. By the age of 14, he was performing for resorts and large corporations across the Midwest. Today, he is one of the fastest rising stars in the industry today, with his mind set on changing the world’s perception of magic. Over the last decade, Reza has garnered a worldwide buzz and loyal fan base with his passion for creating signature grand-scale illusions.

Reza’s unique brand of entertainment has landed him on popular reality shows across 31 countries, including recent U.S. TV appearances on A&E’s Duck Dynasty and The CW’s Penn & Teller: Fool Us. More than a magic show, he infuses state-of-the-art production elements, masterful comedic timing, and numerous interactive and inspirational moments, allowing the audience to experience the magic firsthand.

Tickets are only $10 for children and students. Adult admission is $22, $25, and $32. Due to social distancing in the venue, seats are grouped in pairs, three, four, and more. Pairs of tickets are available online at sfscARTS.org. For groups of three, four, or more, contact the SFSC Box Office at 863-784-7178. Face masks are required to enter the venue and during the performance. The performance runs 75 to 90 minutes without an intermission. The concession is closed at this time. Plastic bottles of water can be brought into the theater.