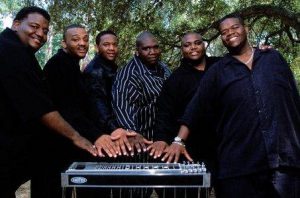 AVON PARK, Fla. – March 11, 2021 – The Lee Boys, one of the top “sacred steel” bands in the United States, are scheduled to perform at the Alan Jay Wildstein Center for the Performing Arts at South Florida State College (SFSC) in Avon Park on Saturday, April 10 at 7 p.m. The performance is free, but tickets are required due to social distancing.

Sacred Steel is a music style and African American tradition that evolved out of the House of God Pentecostal churches during the 1930s. Worship services, driven by a lap steel guitar, was punctuated by “shout” or “praise” music. In the 1970s, the pedal-steel guitar was introduced into the House of God by musicians including Maurice “Ted” Beard Jr, Calvin Cooke, Chuck Campbell, and Acorne Coffee. Determined to incorporate the pedal-steel into their musical tradition, they developed unique tunings, pedal setups, and playing techniques.

The Lee Boys are a family group which consists of three brothers: Alvin Lee (guitar), Derrick Lee, and Keith Lee (vocals), along with their nephews, Alvin Cordy Jr. (seven-string bass), Earl Walker (drums), and Roosevelt (pedal-steel). Chris Johnson, a young pedal-steel player from Miami, has joined The Lee Boys. Johnson, a huge fan of Collier’s, is making quite a name for himself and has shared the stage with Anders Osborne, Warren Haynes, Robert Randolph, Eric Gales, Campbell Brothers, and more.

Following a blazing performance at the 2008 Bonnaroo, The Lee Boys were asked to perform on NBC’s “Late Night with Conan O’Brien.” Their rousing performance had the host jumping out of his chair and raving about the band. The Lee Boys are also the subject of a Florida PBS documentary.

In the last decade, The Lee Boys have performed for more than 750,000 music fans at festivals throughout the United States, Canada, Europe, and Asia. Their unique sound has attracted musical artists such as The Allman Brothers Band, B.B. King, Buddy Guy, Robert Plant, Robert Randolph, Derek Trucks, Mavis Staples, Gov’t Mule, Blind Boys of Alabama, Black Crowes, John Legend, and The Roots – all of whom have performed with the Lee Boys and/or invited them to tour with them.

“Their 2019 ‘Live on the East Coast’ album reached #1 on the chart and it was a follow up to their impressive ‘Testify’ album,” said Cindy Garren, director of cultural programs at SFSC. “This promises to be a raucous, funky performance for the whole family, and I expect to see people dancing in the aisles. This is a casual dress event.”

Face masks are required during the performance. Seating is socially distanced. Tickets are available online at sfscARTS.org or by calling the SFSC Box Office at 863-784-7178.

Upcoming free performances include:  “The Breadwinner,” the award winning, animated film on Thursday, April 15 at 4:30 p.m. and Friday, April 16 at 7 p.m. and Rudram Dance Company, a classical Indian dance company on Saturday, June 19 at 7 p.m.