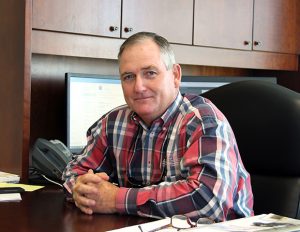 AVON PARK, Fla. – April 4, 2019 – On Oct. 10, 2018, a Category 4 hurricane slammed into Mexico Beach, Fla., having attained peak winds of 155 mph. The hurricane leveled homes, toppled trees, and downed power lines, leaving some roads impassable. The devastation from Hurricane Michael left 271,998 homes and businesses in Florida’s Panhandle without power, so more than 7,500 workers from 15 states and Canada were called upon to restore power to the region as quickly as possible. Van Crawford, vice president of operations at Peace River Electric Cooperative (PRECO) in Wauchula, Fla. and a South Florida State College (SFSC) alumnus, was one of them.

“I went to assist the Gulf Coast Electric Cooperative in restoration efforts three days after the hurricane hit,” Crawford said. “They had two districts, and I was put in place to be the coordinator of one of those districts.”

Crawford took along two people from PRECO, and they worked 16 days with Gulf Coast Electric. In addition to that, they had two working crews, consisting of 10 to 12 men working 10-day intervals.

“When I went there, there was no power,” he said. “When I left, 86 percent of the people had power. Restoration efforts like these involve a lot of people.”

While in the Panhandle, the Wauchula native drew from his experience with Hurricanes Charlie and Irma and his knowledge based on PRECO’s emergency response plan. The company reviews the plan and performs drills every year.

“We had no technology, no communications, and no cell phones in the Panhandle,” Crawford said. Although PRECO’s districts experienced that same scenario with Hurricane Charlie in 2004, technology is a game changer. “It was a learning experience dealing with no resources. So, going forward, what would we do without a phone? How would we adjust to restore power without the technology and communications that we have every day? What backup plans could we establish for communications? What backup plans could we establish for technology? You have to derive a plan of action. Going through these live drills, as with Hurricane Michael, gives you a new perspective and makes you add to your emergency response plan.”

“My responsibility was to facilitate restoration efforts that went on in Wewahitchka, Fla., which encompassed any activity to get the lights back on, such as scheduling people, ordering materials, lodging and food.”

“When we went there, we didn’t know what to expect,” Crawford said. “People were traumatized; they didn’t know what direction to turn. So you’d have to take a walk with them and let them know it was going to be OK. I’ve never seen anything like it. Although I worked Hurricanes Charlie and Irma, I never saw devastation to that extent. It was humbling to go to help folks in such need.”

Crawford was sent to work in Wewahitchka, near Mexico City, in a compound of 700 to 800 people working to restore power to the communities. The other district in the Panhandle had 1,700 men and women. Many of them were members of other statewide associations, contractors, and staff of Florida Electric Cooperative Association—an organization that represents 15 cooperatives across Florida. Cooperatives throughout the state lend each other a hand when a need arises.

“You would start the day at 5 a.m. and, normally, end the day around 10 or 10:30 p.m.,” Crawford said. “We tried to stay with 16-hour days, which included eating and bathing, for safety purposes. Sometimes, we’d go over that mark, but we’d have to get things coordinated for the next day.”

“Of the three hurricanes that hit PRECO’s service district in 2004, the company probably suffered 1,000-1,500 electrical poles down. When Hurricane Michael hit the co-op in North Florida, they had estimated 6,000 poles down. The other two co-ops in the neighboring areas had that many poles down and more.”

Crawford illustrated the effect and challenges the hurricane had on local businesses, wildlife, and residents. “Tyndall Air Force Base was in the district I oversaw. We had to get it up and running quickly. That area also has hundreds of acres of pine trees for paper mills. All these pines were down. And the wildlife—the squirrels, the bears, the deer—didn’t know what to do because their cover was gone. They were confused, running around, and many got hit by vehicles. But the people in the district pulled together and helped one another. Residents who still had food in their freezers, cooked meals so no one would go hungry. What a community it was.”

To the Florida Panhandle, Crawford not only brought his first-hand experience with power restoration after a hurricane but his 32 years working for PRECO. He began his career with PRECO in 1987 as a meter reader. After working nine months in that position, he transferred to the line department and started an apprentice program through the Tennessee Valley Public Power Association (TVPPA). In fall 2001, SFSC launched an Associate in Applied Science in Electrical Distribution Technology program in partnership with PRECO. As a show of support, Crawford and three co-workers enrolled in the program. Crawford earned his degree in August 2002 and went on to earn a Bachelor of Public Administration from Barry University. From there, he climbed the management ladder, eventually becoming vice president of operations.

PRECO serves approximately 43,000 customers in 10 counties. Crawford is responsible for construction and reliability in three of those districts—Indian Lake Estates, Wauchula, and one in Manatee County. It consists of 3,700 miles of power lines overhead and underground.

Crawford is encouraging for anyone who is interested in becoming an electrical lineperson. “You’ll work in adverse conditions, but you’ll get paid well. Today’s lineman pay is running $35 to $40 an hour. When they’re deployed to a storm, they can get up to double time.”

“The electrical lineman has its challenges,” he said. “But there’s a reward for it. Besides excellent pay, it’s a skill that no one can take away from you. Line work is a commitment to safety and responsibility—so you come home at night. Linemen miss a lot of their kids’ events, because they must work—the T-ball games, the dance recitals. Those are the trials of the job. However, it’s rewarding to them when they complete a job—whether it’s pulling conductor through the middle of town, having to set poles, dig trenches, and all the extra jobsite coordination to make that job safe and complete. They’re part of a team that gets it done, so it makes them proud.”

“Equipment is safer nowadays,” he said. “Bucket trucks, climbing belts, and many other tools of the trade make the job more efficient.”

Crawford mentioned that PRECO has hired several employees from the SFSC’s Electric Line Service Repair program. “Even when they go through that, we put them through another apprenticeship program. As they move forward, they advance through different levels and different pay grades.”

SFSC’s Electric Line Service Repair program is offered at its DeSoto and Hardee campuses and accepts students in the fall and spring. By completing the year and a half-long program, graduates earn an occupational certificate and a Class A Commercial Driver’s License (CDL).

“I encourage anyone who wants a challenge in life to become an electrical lineman,” Crawford said. “It’s a great career to be in.”