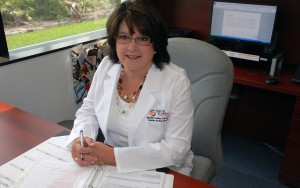 Heston, currently director of Nursing Education, succeeds Rebecca Sroda, who retired earlier this month after 12 years of service to SFSC.

“After an informative series of interviews that stretched over three days, the selection committee came to agreement that Dr. Heston would lead the college’s Health Sciences programs,” Dr. Valentine said. The appointment becomes effective Sept. 1.

“Dr. Heston brings with her a wealth of knowledge not just about the health sciences, but about SFSC and its programs,” Dr. Valentine added.

Dr. Heston graduated from SFSC with a pre-nursing Associate in Arts degree. She earned her Bachelor of Science in Nursing from the University of South Florida. Clarkson College awarded her a master’s degree in nursing education.

While serving as an instructor and later as director of Nursing Education at SFSC, Dr. Heston earned a doctoral degree in leadership in education with a specialization in higher education administration from Barry University.

“I count it a privilege to serve as dean at the institution that shaped my career from its inception,” Dr. Heston said. “My entire career has been interwoven with and supported by the comprehensive and supportive work of SFSC.”

During Dr. Heston’s tenure as director of Nursing Education, she oversaw the launching of the college’s Bachelor of Science in Nursing degree program, which graduated its first class of BSN students in May. During the past two years, she shepherded the newly formed degree program through its initial national accreditation by the Accreditation Commission for Education in Nursing (ACEN).

Dr. Heston recounted her family moved to Avon Park in 1977 to start a business and a new life. “I found myself at what was then South Florida Junior College as a 17-year-old undecided freshman,” Dr. Heston said. “A love of the natural science courses offered at the college, coupled with a job opportunity at a local nursing home, laid the foundation for my career in health care.”

Dr. Heston said in her nursing career she gained experience in acute care, primary care, and home health, including stints in supervisory positions. She started teaching nursing to SFSC students as a part-time instructor. She signed her first full-time employment contract with the college in August 1997.

Now, nearly 20 years later, Dr. Heston said she recognizes the importance the health sciences dean plays at SFSC. “I cannot help but reflect that I feel prepared to take on this challenge,” she said.

Dr. Heston lives in Avon Park with her husband Terry, who is a developer and sits on the Avon Park city council.