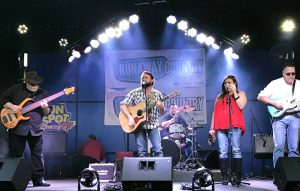 When he’s not teaching students, the former U.S. Army military police sergeant, uses those same marketing principles to raise the profile of the band he formed three years ago, a group that has become his passion.

Martin is the front man for Blackbird Anthem, whose music is infused with the blues, country, and, said Martin, “American rock ‘n’ roll.” What’s more, the band’s music touches upon themes caught up in the lives of those returning from conflicts in the Middle East.

From sending demos to promoters to a sleek online presence to linking up with other musicians, Martin’s marketing prowess, along with his distinctive blend of music, has gotten Blackbird Anthem notice. The group has just come off a show at the three-day Runaway Country Music Fest in Kissimmee, Fla., an annual event that draws thousands.

“We’re getting busy this summer with performances lined up in May for veterans-themed shows in South Carolina and Texas,” Martin said, from an office with walls dotted with posters from his favorite band, Counting Crows. “What’s cool is we’ll close out May with an appearance at the legendary Firehouse Saloon in Houston, a hotspot for talent where we’ll be looking to make connections.”

To see how the bearded college professor came to music, one has to trace his journey from a career patrolling the streets of Sebring to fending off Iraqi insurgents on the highways of Iraq.

Martin, a self-described Army brat, grew up in cities across the country and overseas. His family landed in Highlands County. After graduating from Avon Park High School, Martin earned his associate degree at SFSC in 1995.

“After graduation, I started out as a corrections officer for the state of Florida,” Martin recalled. “I had just gotten married, and with a kid on the way, corrections was a career that offered good benefits and a steady paycheck.”

Martin parlayed his corrections experience into a spot on Sebring’s police department. “I did everything with Sebring, from road patrol to K-9 to investigations,” he said. “But I always had a yearning to try my hand as a military police officer, so I signed up for the Army Reserves.”

Martin’s enlistment came only months before the 9/11 attacks. When the United Stated-led invasion kicked off in March 2003, Martin’s 810th M.P. Company was in Kuwait ready to deploy north into Iraq.

“We were assigned to escort convoys that at times comprised 75 semitrailers with supplies for our troops,” Martin said. “We were constantly under attack from snipers, mortar fire, or roadside bombs.”

After his tour of duty had been extended three times, Martin was happy to be out of harm’s way in Highlands County. He landed a job at SFSC coordinating the college’s correctional officers training program.  Still, life hadn’t resumed its pre-deployment rhythm for Martin.

“Spending 24/7 trying to survive in a war zone changes you,” he noted. “A specialist at the Veterans Affairs hospital egged me on to find a creative outlet, so I decided to self-learn the guitar.”

Martin said music always occupied an outsize place in his life, but he had never learned to read notes, play an instrument, or sing.

“The only thing I could play was a radio,” Martin said. “When I first started practicing, it sounded as if I were torturing a herd of cats.”

In time, Martin said something “clicked” within him. With persistent practice, he gained confidence and skill. “Like many artists, I found an outlet performing in church,” he added. He said he honed his singing, eventually finding his vocal range.

When a local eatery sponsored an evening of music benefiting veterans’ organizations, Martin jumped at the opportunity. “I said, ‘How can I help?’”  He came away from his first gig telling himself, “I like this live performing thing.”

Martin found an eager musical companion in Dave Hale, himself a veteran, fellow SFSC employee, and multi-instrumentalist and published songwriter. Together, they launched Blackbird Anthem.

“We take Blackbird from one of my musical heroes, Johnny Cash, who was known as the dark bird of country music,” Martin said. “Anthem conjures up a rallying cry, which is something that runs throughout our songs.”

In 2016, they released their first EP “Stories I’ve Never Told.” An EP, or extended play album, has four to six tracks, about half that of an LP.

In “Drinkin’ with Me,” from their debut album, Martin sings of the heartache of a returning veteran: “No Dear John letter taped to the door/ Just a bottle of bourbon and a glass on the floor.”

“Our songs tell stories of love, heartache, one night stands, tattoos, alcohol, and war,” Martin said. “These are all the things that make American rock music so great.”

They are songs written by veterans with veterans in mind. Blackbird Anthem’s music also directly benefits the veterans who serve as the inspiration for the music. The band frequently plays shows with the proceeds going to veterans organizations.

Martin says Blackbird Anthem’s recent single, “22,” is now available at Amazon, iTunes, and Spotify. “I wrote the song as a dedication to the 22 veterans each day who die by suicide,” he said.

All proceeds from the song go to the Lone Survivor Foundation, a nonprofit helping wounded service members and their families adjust to post-deployment life, according to Martin.

The band recently celebrated the release of a second album, “Battle Cry: Songs of America’s Heroes,” featuring one of their songs among those from several artists. Martin said it ranked as high as 21st place on the iTunes rock charts during the fourth week in March. He said all proceeds from that record will benefit The Valkyrie Initiative, an organization serving veterans readjusting to civilian life.

While Martin has immersed himself in promoting Blackbird Anthem, he still follows a rigorous schedule at SFSC that keeps him in the classroom not only teaching marketing but management and leadership. He also serves as an adviser to the college’s chapter of Phi Beta Lambda, the premier postsecondary student business organization in the United States.

“We’d love to get a record contract or get signed on for a full summer tour,” Martin said of Blackbird Anthem. “That may not happen, but it’s still fun playing the music.”