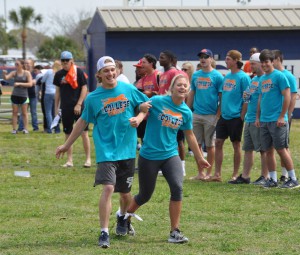 The four-day event pits teams of SFSC students and employees against each other in a slew of fun-oriented but competitive games.

The first day of the games saw ten teams vying for top honors in three-legged races and egg tosses. Each team chose off-beat monikers and sported vibrantly colored T-shirts to stand out during the games. From the peach-colored Goonies to the turquoise of There She Is to the bright green of CK Fly, each team tried to best the other while having fun. 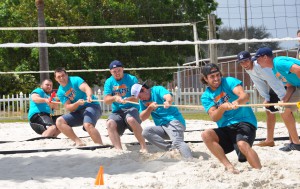 SFSC students in a contest of strenght compete in a game of tug-of-war.

“This year, the teams chose the events and had a lot of input into planning,” said Andy Polk, the coordinator of student life and baseball team’s assistant coach. “This is my fifth year overseeing the games, and it has come off very well.”

On day two, the teams turned out in the Panther Gym for bragging rights to the top dodgeball team. After eight teams were eliminated, SFSC employees, playing under the team name Risky Business, faced off against There She Is, a team comprised of men’s baseball players. Their pitching skills couldn’t save them—There She is went down in defeat at the hands of the college employees.

The sun shone brilliantly on day three when the teams took to the pool for a belly flop contest. James Holle, a freshman from Olympia, Fla, didn’t win the competition but he won the laughs of everyone for painting a bull’s-eye target on his belly. In spite of his efforts, he missed the mark.

From water to land, the teams took to the sand of nearby volleyball court for a contest of strength in a game of tug of war. The men of Their She Is held out, defeating Your Future Boss, a team comprised of students in SFSC’s bachelor’s degree in business program.

The games ended with teams running an obstacle course on the college’s intramural fields. In the end, Goonies tied with There She Is, with each team garnering 95 points. A tie-breaker chose the winner: There She Is.

“The week was super fun,” said Rebecca McKenzie, who serves as president of the student government association. “The games are competitive but everyone was focused on having fun.”

“In a way, it’s like a break before Spring Break,” she said.