AVON PARK, Fla.–June 18, 2015–Americans spend $55 billion a month at restaurants, according to the U.S. Department of Commerce, nearly $3 billion more than they do at grocery stores. Brennan Warner wants to get in on the action.

Warner is poised to start a trainee-management position at Ruby Tuesday next week. He credits his shot at the job to his finishing the culinary arts program at South Florida State College.

“If you want to get a head start in the restaurant business, SFSC’s culinary arts program is the place to start—hands down,” Warner said. “You’re going to be looked at more seriously than someone without the training.”

Warner, 28, said he was returning to his roots in the food service business. Out of high school, he worked in local restaurants, first helping out with the salad bar, taking over food preparation, and moving up to cook—mostly working at mom-and-pop eateries.

But in 2007, he opted for a new line of work. He graduated from SFSC’s law enforcement program and started a six-year stint as a deputy sheriff, working for Glades and Highlands counties. 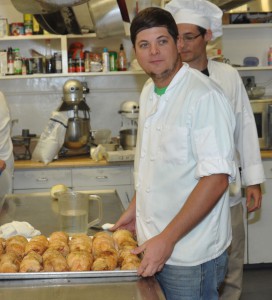 Brennan Warner in the kitchen of the Hotel Jacaranda

Now, Warren wants back in the kitchen.

“I love being in the kitchen,” Warner said. “I enjoy the fast pace you find there, and I just love food.”

To get reacquainted with his first love, Warner enrolled in SFSC’s Food Management, Production and Services program last August. The 10-month occupational certificate course covers the gamut of food service, from kitchen organization to menu planning to cooking the perfect turducken. (What’s turducken? It’s chicken stuffed inside duck that is then stuffed inside turkey—all boneless.)

Graduates of the program find their way into every corner of the food service industry, said Timothy Hansen, professor of culinary arts. “We see graduates find jobs in Hilton and Marriott hotels, family-owned restaurants, and corporate establishments like Ruby Tuesday,” he said.

“We even send graduates to the resorts out in Yellowstone National Park each summer, where they immerse themselves in the business and get see the west,” he said. “One student stayed on and is doing very well for himself.”

Hansen, known to his students simply as “chef,” learned the food trade at New York’s Culinary Institute of America, the nation’s premier cooking school. After three decades in the kitchens of resorts and dinner clubs in the Midwest and New York, he chose to settle down in Sebring when SFSC offered him a teaching job.

The culinary program is housed Avon Park’s Hotel Jacaranda, a historical structure that still serves visitors, both in its dining and guest rooms.

Students use the hotel’s kitchen to master dicing onions, making donuts, and roasting turducken to perfection. To hone their skills, students handle all the food preparation for several events, including the SFSC Foundation’s annual gala.

The students say Hansen’s experience and hands-on teaching approach is key to their success.

“With his background, Chef Hansen brings a lot to the learning we do in the kitchen that’s invaluable,” said Jeremy Ethridge, a student who graduates this week with Warner and who has lined up a cooking post in the Navy.

“This definitely isn’t flipping burgers,” Ethridge said. “Chef Hansen has us prepare everything from scratch and turn it into food that tastes amazing.”

With Americans now spending more on eating out than at home, prospects for employment in the restaurant industry remains upbeat.

Warner is hitching his future to Ruby Tuesday’s success. The chain of casual dining restaurants boasts 737 locations, mainly along the East Coast. Managers at Ruby Tuesday can earn north of $45,000, according to Glassdoor.com, a website that tracks working conditions at American companies.

Warner has his sights set on moving up the management ladder. He said his goal is to move from manager to general manager within five years.

“If I had known about this course when I was coming out of high school, I would have done then,” Warner said.