AVON PARK, Fla. – Nov. 30, 2016 – Adson Delhomme and Jazmin Gonzalez, two Hardee County residents pinning their hopes on a career in law enforcement, are getting a firsthand look at what police work is really like. 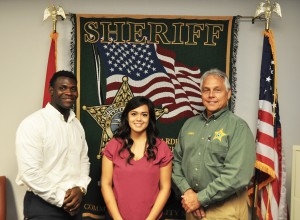 Delhomme and Gonzalez, students at South Florida State College, are taking part in a cooperative education program that puts them in a patrol car, in the courtroom, and at a desk in the Hardee County Sheriff’s Office.

“After enrolling in SFSC, I thought about a career in business or nursing,” Delhomme said after class on the college’s Highlands Campus in Avon Park. “But I discovered I wanted to be on the front lines, so I’m getting geared up to work in law enforcement.”

Delhomme’s hankering to get into police work got all the more intense after he went on a ride-along with a Hardee deputy as part of a cooperative education plan developed between SFSC and Sheriff’s Office. “I’m certain now of one thing,” said the former defensive lineman for the Hardee High School Wildcats. “I’m working in law enforcement.”

“Cooperative education, or co-op in education speak, is a custom-built program that gives students an opportunity to learn about a career not in the classroom but by experiencing it themselves at a worksite,” said Colleen Rafatti, the director of SFSC’s Career Development Center, who oversees the program. “What’s more, they earn college credit for their time at the worksite.”

Rafatti explained that students who have a career in mind can structure a cooperative education program with her, an SFSC instructor, and an employer. Together they craft an educational plan that revolves around job shadowing, with the student putting several hours each week at a worksite. The plan includes regular one-on-one progress reviews with the students’ college instructor and written assignments capturing what the students discovers about their proposed career.

“A well-developed co-op program will help a student affirm the career choice they’ve made, giving them invaluable experience,” Rafatti said. “Other times, the co-op experience will pull a student in an unexpected and different direction with positive results for the student.”

Delhomme, apart from his ride-along with the deputy, has spent hours sitting in County Court Judge Jeffrey J. McKibben’s courtroom translating the proceeding to creole-speaking families and taking on an assortment of tasks at the sheriff’s office in downtown Wauchula.

Gonzalez, Delhomme’s classmate, shares his yearning to get on the front lines helping people. The fellow Hardee High School graduate has her sights set on a career as a state trooper with the Florida Highway Patrol.

“Taking part in the co-op program at the Hardee Sheriff’s Office through SFSC is helping me confirm my passion for law enforcement,” said Gonzalez, the first in her family to attend college.

“Along with Delhomme, I’ve been at the courthouse and in the sheriff’s headquarters seeing the day-to-day workings of how police work gets done.”

Gonzalez said the hours she has spent pouring over police reports has her thinking she might consider investigative police work after she has garnered enough patrol experience.

Both Gonzalez and Delhomme are on track to graduate from SFSC in May 2017. Gonzalez plans to pursue her education at Polk State College, and Delhomme wants to study criminal justice at Florida Gulf Coast University.

Both students know moving up the career ladder in law enforcement requires a four-year degree. They plan to earn their degrees before entering their respective police academies.

“Having these two students here with us has been tremendous, and not just for them but for us too,” said Sylvia Hendrickson, the assistant to Hardee County Sheriff Arnold Lanier. “They listen well, help us in our own work, and, what’s more, they learn about law enforcement.”

Hendrickson, who oversees Gonzalez and Delhomme’s cooperative education activities while at the sheriff’s office, said the “real world” experience the students get is invaluable.

“So many of our folks are involved with the students,” Hendrickson said. “From the judge, to the probation officer, our accounting staff, the deputies, even Sheriff Lanier finds time to spend with them—this has been a great experience for all of us.”

For their efforts learning about “real world” of criminal justice, Gonzalez and Delhomme earn college credit that counts toward getting their degrees at SFSC.

“The college credit doesn’t come just from being there,” said Rafatti of SFSC’s career center. “The students come back to campus and produce written assignments describing their experience that must pass muster with their instructor.”

In all, Gonzalez and Delhomme must clock in 135 hours of onsite time to earn their credits.

“To us it seems as if they’re here for such a short time,” said Hendrickson. “But in that time they see and learn a great deal.”