SFSC Commencement Speaker Finds Focus and Structure in Her Life 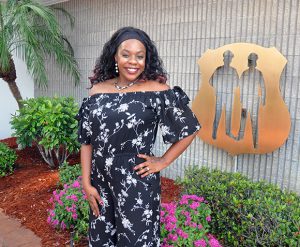 AVON PARK, Fla. — Dec. 3, 2018 — Theodosia Shannon’s academic career began with a wrong turn. But with self-determination, she steered herself back on course and found focus and structure in her life. She graduates with an Occupational Certificate in Basic Corrections from South Florida State College (SFSC) at the Fall Commencement on Thursday, Dec. 13 and will be the speaker at the 6:45 p.m. Commencement ceremony.

Shannon attended SFSC immediately after graduating from Sebring High School in 2006. She had received a scholarship through the College Reach Out Program (CROP), in which she participated from sixth through 12th grade.

Active 1996 – 2016, CROP was a matching, grant-funded program through the Florida Department of Education to prepare at-risk students in grades six through 12 for college. SFSC offered participating high school students in its service district of DeSoto, Hardee, and Highlands counties scholarships to the College.

“I attended SFSC on the CROP scholarship, but I didn’t do well,” Shannon said. “My mind wasn’t where it needed to be.”

So she enlisted in the U.S. Army with the expectation that it would help her establish structure in her life. Later, she would be able to take advantage of the GI Bill which would cover 100 percent of her education. “I was a preacher’s kid and a wild child,” she said. “I’m the baby of my family. So many things in my family were done for me. By the time I got to college, it was a lifestyle and culture shock for me.”

Shannon served five years in the military, stationed at Fort Sill, Okla. “I was never deployed,” she said. “I stayed stateside the whole time. Going into the military, I thought I’d go someplace exotic. But I went to a town smaller than Sebring.”

“The military gave me structure and a new-found respect for authority,” Shannon said. “It gave me responsibility that I didn’t have before. I was able to mature and become a stronger woman. If you focus, you can do whatever you set your mind to. When you go into training in the military, you may think you can’t do it, but I was able to tackle it all. I’m not afraid of any challenges now. I’m glad I made the decision to enlist.”

Shannon received an honorable discharge in 2012 and returned to Sebring. Shortly after her arrival, she took a job as a substance abuse counselor. Then a job opportunity arose at CenturyLink in Sebring. But when the company downsized in 2016, Shannon could only find part-time work. In July 2018, she decided to enroll in SFSC’s Criminal Justice Academy in the Basic Corrections program. “I used my GI Bill to go into the program as a self-sponsored cadet,” she said. “It lasted 10 weeks and three days. I remember exactly how long. I, officially, graduated on Oct. 18, 2018.”

Shannon gave her all throughout her time in the program. She became class leader for Basic Corrections Class 196 and was given top honors for academics, along with one other cadet.

“With a military background, law enforcement is an easy transition,” she said. “A lot of the training and rank structure are the same. I knew I could do the work, and I feel that I will be helping other people. Of the people in detention, some can be rehabilitated. I think the system needs people who believe that. The reason I wanted to go into corrections is that it will help a community by doing the care, custody, and control of individuals in our society who no longer have the right to live within our community. It keeps us safe.”

“It was a pure pleasure to have Theodosia in class,” said Michael Austin, coordinator of criminal justice programs at SFSC. “From day one, she had a commanding presence. She took charge of her Basic Corrections class and commanded it like a true leader. Her father is a retired warden for the Florida Department of Corrections. Theodosia has followed in her father’s footsteps by serving in the U.S. Army as well as becoming a corrections officer. I could easily see her becoming a warden in the future.”

Shannon’s father is Dr. Robert Shannon, a pastor at Wings of Faith Christian Worship Center in Sebring. Dr. Shannon served 36 years with the Florida Department of Corrections, where he started his career in security. He worked his way up the ranks and retired from the Glades Correctional Institution as warden.

“My dad’s career had a big influence on me,” Shannon said. “I see the rewards and benefits that my dad received from working in that area. I hope that I will do the same.”

While working in corrections, Shannon plans to continue her education and, eventually, earn a Bachelor of Science in Supervision and Management (BAS SM) from SFSC.

“I’d like to go into classifications, and for that, I’ll need a degree,” she said. Classifications is the administrative side in a prison concerned with inmate housing, inmate work assignments, disciplinary actions, and determines when the inmates are ready to be released. “All paperwork goes through classifications,” she said. “It’s a lot like human resources. For classifications, you must have at least an associate degree, but I want my BAS SM. With that, I’ll have achieved something I’ve always wanted to do.”

Shannon wants to be a good role model for her 10 nieces and nephews. “I want them to know that they can achieve whatever they put their minds to,” she said. “Based on my life experience, I would tell anyone that no matter what you desire, stay focused on it, keep your eye on the prize. You may have to drag a little baggage, but you’ll get there. Those challenges won’t be challenges anymore.”