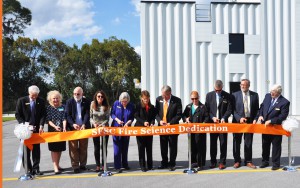 On Wednesday, dozens of public officials, dignitaries, and college employees attended a dedication ceremony at the foot of SFSC’s new four-story-tall fire tower, officially launching the program and showcasing its facilities to the public.

“We dream a lot about the future at SFSC,” said Kevin Brown, SFSC’s dean for applied sciences and technologies, who spearheaded the push to bring the firefighting program to the college. “One of those dreams has become a reality here with our new Fire Science Program,” he said to those who had assembled for the ceremony.

Planning for the program stretches back 10 years, when college administrators mulled the idea of adding firefighting to its offering of public safety programs. The college’s district board of trustees formally requested funding for the program in 2008. That’s when the waiting began.

In 2014, with the help of State Senator Denise Grimsley, the Florida Legislature appropriated $2.6 million to fund SFSC’s plan, giving the college the green light to begin construction and buy equipment.

“We wonder, as do most Floridians, where do our tax dollars go,” said Senator Grimsley, who followed Brown in addressing the audience that included local fire chiefs, city council members, county commission members, and retired firefighters.

“Today’s dedication ceremony offers a solid answer to that question: Here we have a world-class firefighting training center that will train with the highest standards ultimately making our communities a safer place to live.”

Work on the training facilities was completed last summer. The inaugural class of recruits started classes in August, with SFSC enrolling 11 candidates from Highlands, Hardee, and Polk counties.

Steve Ashworth, SFSC’s chair of EMS and fire science programs, walked the audience through the steps to become a firefighter in Florida. He said the state requires career firefighters to complete a two-part training program. The initial 206-hour phase of the course, known statewide as Firefighter I, prepares recruits to work as a member of a firefighting team, giving them the credential needed to serve in a volunteer fire department.

Ashworth said a second 192-hour course, Firefighter II, gives recruits the additional skills to work as career firefighter in a county or city fire department. He added that SFSC will offer the Firefighting II course to members of local volunteer fire departments next month.

Prior to SFSC starting its program, area residents had to travel to Bradenton, Tampa, or Winter Haven to enroll in the complete state-approved course.

“We are extremely proud of this new facility,” said Timothy Backer, a member of SFSC’s district board of trustees who represents DeSoto County. “I served 24 years as chief of the Arcadia and DeSoto volunteer fire departments, so this is near and dear to my heart.”

After the ribbon cutting ceremony, Ashworth lead a tour starting at the 44-foot-tall fire tower in which instructors can burn live fires, simulating structure or stove fires in 18,500 feet of burn space. After watching one of the instructors demonstrate how a recruit can rappel down the tower, the crowd saw Ashworth set a stove ablaze. Within seconds a fireball engulfed the stove, sending waves of flames rolling across the ceiling.

A set of fire props dot the area around the tower that recruits use to learn real-world firefighting techniques. With Ashworth at her side, Senator Grimsley ignited a blaze under one prop, a metal carriage simulating a car that sent flames leaping upward, enveloping it completely in fire.

To give cadets hands-on experience, SFSC acquired two fire trucks. The Hardee County Board of County Commissioners donated half the amount toward the $30,000 purchase of one of its retired fire trucks, Engine #31, a 2003 Pierce Contender, capable of holding 1,000 gallons of water. 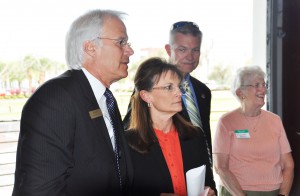 Dr. Tom Leitzel, State Senator Denise Grimsley, and Kenneth Lambert, a member of the district board of trustees.

Recruits practicing their fire suppression skills draw water from a 40-foot-tall tank holding 50,000-gallons. The tank is fed by 6-inch well, with a secondary water supply coming from the city of Avon Park. Ashworth noted the facility was designed to be “eco-friendly.” All the expended water, he said, seeps into a retaining pond so that it can return to the aquifer.

Ashworth said applicants to the program must have a high school diploma and have reached age 18. While applicants need not pass a physical agility test, the nine months of training to complete both Firefighter I and II requires recruits to pull heavy hoses, break through doors, and carry a potential victim to safety.

The 11 recruits in the inaugural class will take their certification examination next week. Ashworth said nine of the recruits already landed jobs with fire departments, ready to serve their communities.

“We never expect to wake up to find a fire truck in our front yard,” said Senator Grimsley. “But when we find ourselves in those moments I want to know we have done our best to train and equip those who do respond. That’s why today is a great day for SFSC and Florida’s Heartland.” 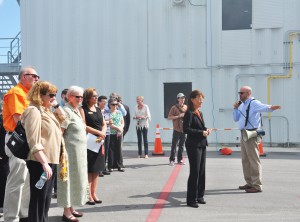 Steve Ashworth leading the tour of the facility. 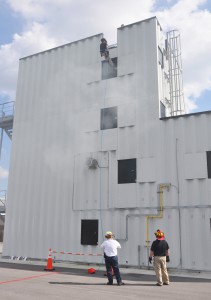 An instructor rappelling down the fire tower. 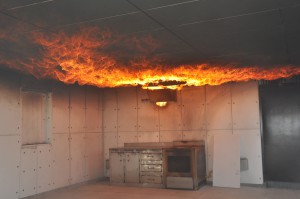 A ceiling engulfed in flames in one of the burn rooms.