Elementary Education Graduate: A New Generation of Teacher Takes Over

She kept her mind fixed on that goal from elementary school to her enrollment at South Florida State College.

In May, Todd walked across the stage at the Wildstein Center for the Performing Arts to pick up her Bachelor of Science in Elementary Education (BSEE) diploma at SFSC’s spring Commencement.

Within weeks of earning her degree, the 21-year-old Hardee County native landed a teaching job at Bowling Green Elementary School. Todd will take over a kindergarten class from a retiring teacher. But not just any teacher.

With the start of the school year in August, Todd will step into Marilyn Best’s classroom. It was Best who taught Todd in kindergarten at Bowling Green 16 years ago.

“I knew I wanted to teach, and my heart was always with the youngest children,” Todd said. “So, when I learned that I would take over from my own kindergarten teacher, I thought this was too awesome.”

Todd’s connection with Best’s kindergarten classroom goes back further. Todd’s mother also had Best as a kindergarten teacher at Bowling Green, as did five of Todd’s six sisters.

The oldest of seven girls, Todd said she always had a love for school and strove to earn high grades. In high school, she took classes as a dual enrollment student at the SFSC Hardee Campus, completing her secondary school courses while earning college credits.

“When I finished high school, I had already earned most of the college credits needed for my associate degree,” Todd said. “SFSC’s Hardee Campus offers a setting where you develop close bonds with the instructors and the advisors, so it was great place to study.”

Todd said she had her sights set on getting her teaching credentials once she had completed her associate degree at SFSC, either at Florida Gulf Coast University or the University of Central Florida.

“I am first in my family to go to college,” she noted. “My choice of school and my career direction is a big deal for me.”

But just as she was weighing her options, SFSC launched its BSEE program in 2014, bringing a teacher education program to residents of the Heartland. Todd said it was an easy decision to stay with SFSC. One of the pluses: she could complete her internships at schools near her home in Hardee County.

It was an internship arranged through the SFSC BSEE program that led to Todd’s selection as a kindergarten teacher by Bowling Green.

“I was assigned to intern in a second grade classroom at Bowling Green,” Todd said. “The internship gave me an opportunity to work alongside the other teachers and to form ties with the school.”

As last year’s school term wound down, the staff at Bowling Green invited her to a party celebrating the retirement of several teachers, including Best, her former kindergarten teacher. At the party, news of Todd’s appointment to succeed Best spread. She said partygoers shed tears of joy. “They all made a big deal of it,” Todd said. 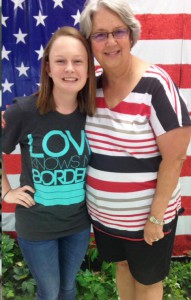 Shaina Todd and Marilyn Best at Bowling Green Elementary School at the close of the 2015-16 school year.

“I cried, too, when I heard the news,” said Dr. Maday Leon, lead instructor for the SFSC BSEE program. “Hearing the story of a teacher who made an impression on a young student then passing on the keys to the classroom to her years later is what education is all about.”

“One of our professors, Ellen Thornton, was going to retire, and we begged her to stay on until we graduated,” Todd said. “She put off her retirement to see us through to the end of the program before moving to the Florida Keys, and that says a lot about SFSC’s faculty.”

Todd made the President’s List each of the five semesters she took BSEE classes, while maintaining a 4.0 grade point average.

Earlier this summer, Todd was in her new classroom putting up Dr. Seuss-themed placards when her former kindergarten teacher, Best, stopped in for a peak at her progress and offered some advice.

“Count your children on the first day,” she said with a chuckle. “Also, make sure you know how each one of them gets home—those are the biggies in kindergarten,” said Best, whose retirement comes after 32 years of teaching.

Todd harbors no illusions that the start of her career in public education will come without any hitches. “Some folks say to focus on money or bring up the negative side to a teaching career,” Todd noted. “But I think teaching is a wonderful choice.”

“It’s about the outcome not the income,” Todd said. “A teacher puts in so much work, and it’s really rewarding to see how you can shape a student’s life.”

“My teachers have made a tremendous impact on my life, and now I want to do the same for others,” she said.

Follow this link to learn more about the BSEE program: SFSC BSEE.