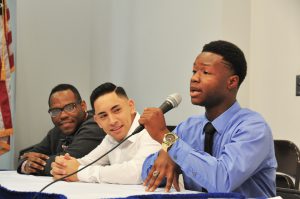 SFSC had invited the students to a half-day conference aimed at motivating them to enroll in college credit or occupational certificate programs after completing high school.

Last year, SFSC launched its Minority Male Initiative to address the faltering rate of high school males—mostly African-American and Hispanic men—who do not move on to postsecondary education.

After coffee and doughnuts, the students took their seats in an auditorium-style classroom to hear from SFSC administrators, currently enrolled SFSC students, and college alumni. The common theme: Young men can find a supportive, nurturing college experience at one of SFSC’s three campuses and center—an experience that will prepare them for the future.

“There’s one fact that’s without dispute,” Dr. Timothy Wise, SFSC’s dean of Student Services, told the students. “Earning a college degree or certificate will result in better employment prospects and higher wages for you.”

He was followed by Erik Christensen, SFSC’s dean of Applied Sciences and Technologies, who gave the students a glimpse of a SFSC’s new program in mechatronics, robotics, and technology.  Christensen explained that mechatronics is a blend of engineering, computer technology, and electronics intended to create functional and adaptable products.

“If you like technology and producing innovative products, then you want to look into this program,” Christensen told the students. He said it launches this fall on the SFSC Highlands Campus and will expand to the SFSC DeSoto and Hardee campuses the following year.

Dr. Wise then ushered six young men to the front of the classroom. He introduced a mix of currently enrolled SFSC male students and alumni who shared their experiences at SFSC with the high school students.

“I knew for me it was important to start local to get a grasp on what college was like—that’s why I decided to come to SFSC,” said Nathan Mickens, an SFSC graduate working toward his bachelor’s degree at the University of Central Florida (UCF) in Orlando. “Right out of high school, some guys want to go on to a big university away from home then often find themselves overwhelmed and lost amid thousands of students.”

The students also heard from Emmanuel Santine, Greg Rawlings, Jose Torres, Richard Sherrill, and Equon Smith. The stories from each student were different but the message was the same: You can get into SFSC, you can succeed, and a future is awaiting you.

Rawlings, who earned his associate degree at SFSC and is poised to graduate from UCF, lauded the individual attention students get at SFSC.

“When I was here at SFSC, I could sit down with my advisor, Rob Hampton, and get individualized guidance on what courses to take to complete my degree,” Rawlings said. “At UCF, I’m just one of tens of thousands and don’t get the one-on-one attention I did at SFSC.”

“Let’s face reality,” said Brian Kemp, Hardee Senior High School’s football coach and dean of students, after taking over from the SFSC panel. “Many of you come from single family homes, you’re economically disadvantaged, or you have nobody in your family who graduated from college to whom you can turn to for advice, so you need to take to heart what these men just told you.”

Dr. Wise had invited Kemp to present a motivational talk to the students, one that would jolt them.

The former college football player and track athlete energetically paced back and forth, hurling admonitions, bellowing advice, and drawing howls with his down-home wisdom.

“Listen here! You never get a second chance to make a first impression,” Kemp intoned, slapping his hands together. “When you first meet a professor or employer, your every word, reaction, and mannerism is going to stick in his or her mind. So, look presentable, speak well, and be polite.”

“I grew up in Bowling Green, I went to Hardee Senior High School, I was you 14 years ago,” Kemp said. “I know what it’s like, so you guys need to listen. Plus, when I played football at Hardee, we never lost to Avon Park.” That zinger that brought jeers from the Avon Park students and a roar from the Hardee contingent.

Leaving the tease behind, Kemp drew lessons from his college days, urging the young men to plug into support networks, stay focused on graduation, and make their mothers proud.

As the conference wrapped up, Dr. Wise told the students their application fee would be waived if they applied to SFSC by month’s end. He then oversaw the drawing of names, awarding one student from each high school a $500 scholarship if they enroll in SFSC for the fall academic term.