AVON PARK, Fla.–May 2, 2016–Too many young men in Florida’s Heartland are not enrolling in college after they leave high school. South Florida State College aims to do something about that disturbing trend. 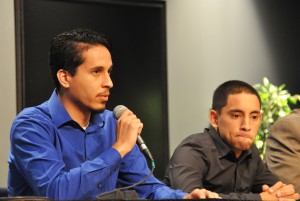 By 9 a.m. on April 29, school buses from the five high schools in DeSoto, Hardee, and Highlands counties were rolling into the parking lot outside the SFSC University Center Auditorium on the Highlands Campus for the college’s Male Initiative Conference.

Out poured male after male, with not female among them. The 150 male high schoolers jammed into the auditorium to hear from currently enrolled SFSC students and Panther alumni what college life is like and how they can make a success of studying at one of SFSC’s five campuses.

“College is definitely not like high school,” Joshua Cuencas told the high school students from the auditorium’s stage. “While there are similarities, if you get a handle on what’s different, then you’ll have a better chance at succeeding once you’re here.”

Five of Cuencas’s peers joined him on the stage for the student panel, each taking turns answering a range of questions, revealing tips and hints at how to navigate college, and telling their war stories on adjusting to campus life.

The students also heard from Rashaud Thomas, Hernando Sierra, Richard Sherrill, Wesley Baggett, and Sevens Pierre. The theme was the same but the stories from each student were different: You can get into SFSC, you can succeed, and there is a future awaiting you.

But the young men heard not to get carried away socializing, least they divert their attention from the classroom and the books, according to one student panelist who let the freedom of campus life nearly get the better of him. Watch that GPA. If it falls too low, your financial aid eligibility might get suspended, warned another panelist.

Most important, they heard again and again that engaging with the faculty, hitting the books, and asking for help will get them through the inevitable rough patches.

SFSC has taken up the challenge of closing the gap between males who graduate from high school and fail to enroll in college. “Our panel of current students did an outstanding job talking about how to make a success of college,” said Dr. Timothy Wise, dean of student services, who organized the conference with the help of a campus-based task force. “What is also important is the buy-in and support we had from the high schools in our three-county area.”

The high school students next heard from a panel of SFSC alumni who have gone on to higher education or successful careers. From a digital marketing consultant to a pair of SFSC employees, to a junior at the University of Central Florida, the story was the same: staying focused on your goal of graduating will get you places.

When the panelists wrapped up their portion of the conference, the tone in the auditorium went from uplifting and staid to uplifting and high energy.

Zep Augustine, an entrepreneur and motivational speaker, bounced up to the stage and let loose with a holler that grabbed the high school students’ attention. Pacing across the stage, jumping down into the audience, and leaping back up, Augustine pounded the students with life lesson after life lesson.

“Dream it, position it, get it,” said Augustine, repeating his formula for success.  “You need to be in motion,” he yelled. “Who’s going get into motion right now, get out of their seats, and move closer to me?”

At first only two students took the cue.  But within the span of one minute, young men who had taken seats toward the rear of the auditorium scampered up front to take in the “coach’s” talk.

After Augustine’s wrapped up his talk, Dr. Wise told the students if they applied for admission, the college would waive the application fee. “Coach Augustine did an amazing job of connecting with the students’ minds and getting them engaged in the conference,” Dr. Wise said.

Augustine knows the Heartland well. He played football for the Lake Placid Green Dragons and University of Florida Gators, and now owns his own fitness company, Next Level Sports and Fitness.

“This was a great way for us to learn more about college life, and in particular, how to do well here at SFSC,” said Phillip Pham, and 18-year-old senior at Sebring High School.

Before leaving for home, the students had an opportunity to meet one-on-one with admissions officers, financial aid advisors, and student support counselors.

“You could see that the panelists and coach Augustine had made an impact on these young men, and I think, their view of college,” Dr. Wise said. “It also sure made them hungry,” he said.  “Those young men went through 75 boxes of pizza.”