AVON PARK, Fla. – Dec. 16, 2016 – South Florida State College celebrated the academic achievements of its students with its fall term Commencement, Dec. 15, in the Wildstein Center for the Performing Arts on the Highlands Campus, Avon Park. 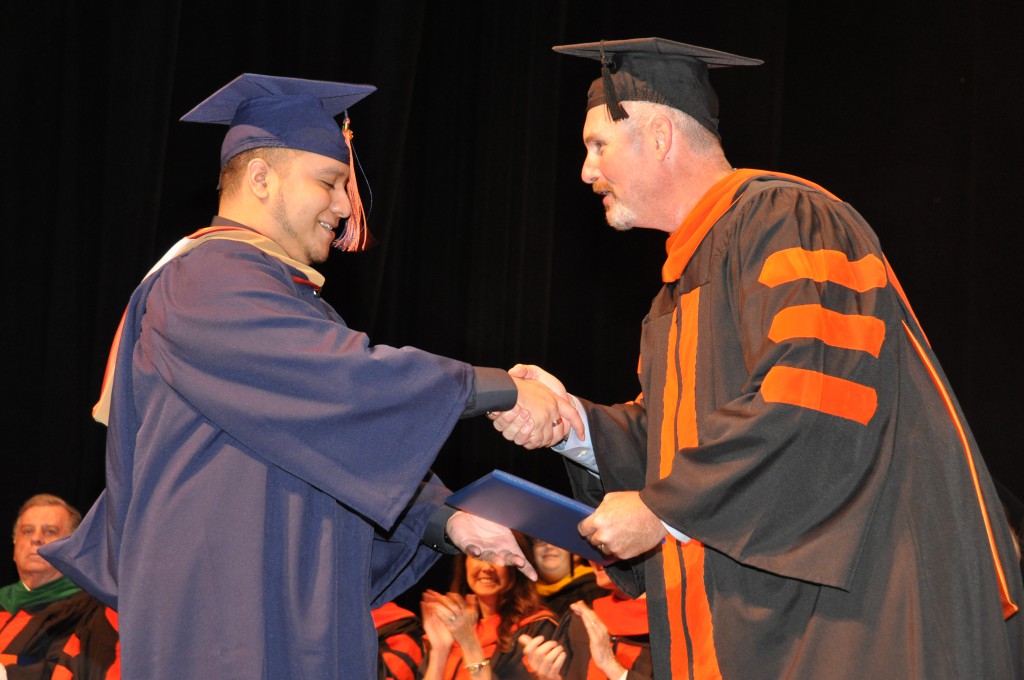 In 2014, SFSC started honoring its graduates with a December Commencement in addition to a customary ceremony held in May.

“Tonight we celebrate great things,” said Derren J. Bryan, the chair of SFSC’s District Board of Trustees, who delivered the welcome remarks to family and friends of the graduates filling the Wildstein Center’s seats. “For most of you, especially your parents, tonight may be a dream come true.”

Focusing his attention squarely on the students, Bryan said, “For you students, it is an accumulation of long hours, sacrifices both personal and family. It’s about setting a path, setting out on that path, making adjustments when needed, but enduring forward into our world.”

Before the students mounted the stage to receive their diplomas, Dr. Thomas C. Leitzel, SFSC’s fourth president, noted the commencement marked a historic moment. “We have three new public school leaders in the three counties served by SFSC, and they are all here tonight to show their support and to extend their best wishes to our graduates.”

“I look forward to establishing new relationships and new initiatives that allow us to implement and support our collective missions that make learning a kindergarten-to-college integrated system that will culminate in events like this,” Dr. Leitzel said.

Audra F. Weeks, a Hardee County resident who has been a dual enrollment student at SFSC since her sophomore year in high school, delivered the student address.

“For the sake of full disclosure, I profess that I have no profound words of wisdom to offer you this evening,” Weeks told her classmates. “Instead, I want to share with you my biggest fear best summed up by Nelson Mandela: “There is no passion to be found in settling for a life that is less than the one you are capable of living.”

Weeks went on, “The problem with “settling” is that it is so easy to do. But this monotonous way of life leaves you with potential not fulfilled, passion never pursued, and God-given talent never put to use. You see, my fear is not of what will happen when I try to pursue my dreams; my fear is what will happen—or not happen— if I do not pursue them wholeheartedly.”

Weeks, who earned her Associate in Arts degree from SFSC at the same time she graduated early from high school this month, encouraged her classmates to cast aside fear and complacency, and “to strive for greatness and remain determined to pursue your dreams.”

After Weeks delivered her remarks, each graduate was called up to the stage with SFSC’s trustees alternating in handing them their diplomas.

Some 207 students had met the SFSC graduation requirements for the December Commencement. Of these, ten students earned their Bachelor of Applied Science degrees in Supervision and Management, 103 their associate degrees, 83 their vocational certificates or college credit certificates, and 11 graduated of SFSC’s Adult Education program.

Family and friends who could not attend the ceremony were able to go online to watch a live stream of the speakers and the students crossing the stage. Graduates and friends followed the ceremony on Twitter and Facebook using the hashtag #SFSCGrad2016.

After the ceremony, the graduates joined their families for a reception on campus, posing for pictures, with many heading off to dinner to celebrate their achievement.