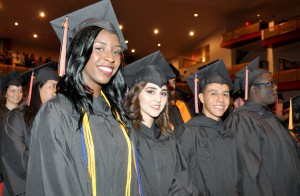 Students file into their seats at SFSC’s 2015 fall commencement.

AVON PARK, Fla.–Dec. 18, 2015–South Florida State College marked the end of its 50th anniversary with its fall term Commencement, Dec. 17, in the SFSC Wildstein Center for the Performing Arts on the Highlands Campus.

“This is a historic occasion not only because you are graduating, but because we are also concluding our yearlong celebration of 50 years of excellence in education,” said Kris Rider, the chair of SFSC’s District Board of Trustees. SFSC got its start in 1965 when, after approval of the Florida Legislature, it opened in temporary quarters in downtown Avon Park.

“Beginning in 2016, we will focus on the next 50 years, of not only excellence in education, but of growth, expansion, and pursuit of our vision,” said Rider.

Martile Blackman delivered the student commencement speech. Blackman, who earned her Bachelor of Applied Science degree in supervision and management, started her freshman year at SFSC 34 years ago. After completing her first year of course work, she put her college education on hold while she raised five children. She returned to SFSC in 2012, earned her associate degree a year later and immediately enrolled in SFSC’s bachelor’s degree program.

“I used to have a problem finishing something I started. The only reason I finished a pregnancy was that I had no choice, nature took over,” said Blackman, to laughter of the students and guests. “I have now proved to myself and others that I can finish what I start and excel at it by where I am standing today.”

The 52-year-old Blackman, who joked that she was older than most of her instructors, imparted words of wisdom at the end of her speech by reciting a poem she had written for the occasion. She used her free verse poem to say that life was a long walk, along which travelers could, if they were willing, find answers to life’s questions, and in doing so, make their journey distinctly their own.

With her 34-year quest for a degree now complete, Blackman said she plans to start a career building upon the business skills and knowledge she learned at SFSC.

Before handing students their diplomas, Dr. Thomas C. Leitzel, SFSC’s fourth president, encouraged them to do “amazing things” with their lives. “Live each day with a curious mind, a generous disposition, and a desire to stand up for what’s fair and what is right,” said Leitzel.

“This truly marks the day when you join the community of alumni who are Panther Proud,” said Dr. Leitzel. “Show your pride. This is your day. You earned this moment.”

In all, 202 students had met SFSC’s graduation requirements. The college conferred the Bachelor of Applied Science degree in supervision and management on 21 graduates. The college awarded associate degrees to 109 students. Vocational certificates or college credit certificates went to 57 students, with another 15 graduating from the Adult Education program.

Family and friends who could not attend the ceremony were able to go online to watch a live stream of the speakers and the students crossing the stage.

After the ceremony, the graduates joined their families for a reception on campus, posing for pictures, with many heading off to dinner to celebrate their achievement.