AVON PARK, Fla.–April 27, 2015–As South Florida State College (SFSC) celebrates 50 years of meeting the educational needs of DeSoto, Hardee, and Highlands counties, the SFSC Foundation, Inc. celebrates 50 years of supporting the college and its students through scholarships. These milestones were celebrated at the 31st Annual Spring Gala on April 25 at the Hotel Jacaranda in Avon Park.

More than 150 supporters attended the event that commemorated a half a century of the college’s growth – from its key founders and supporters, to the achievements of its alumni, students, and faculty.

“This was our 31st Annual Spring Gala and since the college is celebrating its 50th anniversary this year, we decided to tag onto that theme and invite all of our emeritus Foundation Directors back for special recognition,” said Don Appelquist, executive director of the SFSC Foundation, Inc. “Many were able to attend and it gave us the chance to once again show our appreciation to these generous people who gave so much of their time and energy to support South Florida State College.  The evening was great fun, and we raised needed money to support students at our college.” 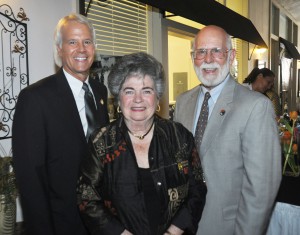 Each year, the SFSC Foundation, Inc. conducts its annual meeting during the banquet and raises money for student scholarships. Last year the foundation awarded over $475,000 in scholarships.

The evening started off with a silent auction of items from local individuals and businesses with a special performance by “Patsy Cline and the Big Hoss Band.” During the meeting, the board elected and welcomed one new director for a three-year term, Dr. Vinod Thakkar. The college recognized several groups and individuals who have been instrumental in the establishment of the college.

In 1965, South Florida Junior College was established by the Florida Legislature and began operating in temporary facilities in downtown Avon Park. Over the past half a century and with significant community support, South Florida State College has grown to encompass the DeSoto, Hardee, and Highlands campuses, the Lake Placid Center, and several off-site centers.

As part of its 50th anniversary celebration, special events are being held in every community SFSC serves. A capital campaign is being launched to raise support for SFSC in its next 50 years. For more information on SFSC’s 50th Anniversary, visit http://www.southflorida.edu/college/50th-anniversary.

The SFSC Foundation exists to enhance community awareness of the college, to encourage, solicit and accept gifts, to receive bequests, and to account for and manage cash and non-cash gifts donated to the foundation. Funds received by the foundation are distributed to benefit and advance the college and to encourage and subsidize its students, staff, and programs. In addition to scholarships and no-interest, short-term loans, the foundation provides educational facilities and low-cost housing opportunities for SFSC students.