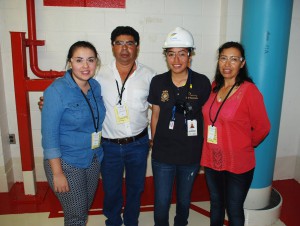 Laura Patino (second from right) with her parents and sister at Exelon Corporation Family Day, visiting the nuclear power plant where Patino works.

AVON PARK, Fla. – Nov. 28, 2016 – When it came to what Laura Patino wanted out of life, she was laser focused since childhood. She saw herself working in a science-intensive job.

As a sixth grader, Patino, a 2012 graduate of South Florida State College, wrote in an essay outlining her career plans: “When I grow up, I hope to be an astronaut or astronomer.”

Her science-centered career path took something of a detour, albeit a minor one. Now, with a degree in nuclear engineering in hand, Patino has scored a position working with a team operating a nuclear power plant.

“I work in an industry that’s vital to the economy and everyday people,” Patino said. “My colleagues and I have to keep this plant running 24 hours a day and seven days week so that our customers have the energy they need for their businesses and homes.”

Patino started learning the basics ​​​undergirding nuclear engineering at SFSC. In fact, she began attending classes at SFSC even before she graduated from Avon Park High School, where she placed fourth in her class of 233.

A native of Colombia, who moved to Florida when she was 7-years-old, Patino exceled in high school with the help of a mentor from Take Stock in Children. Schoolchildren considered at-risk of not earning their high school diploma get regular visits from a Take Stock mentor who offers guidance and a supportive ear.

The extra attention Patino received propelled her along. She took advanced placement coursework, played drum major in the band, and earned a coveted research internship at Archbold Biologic Station in southern Highlands County. She even started taking college classes while in high school.

Those three semesters, though, were critical for Patino. She took physics with Erik Christensen, a former ocean and naval engineer with the U.S. Navy. “Professor Christensen had experience with the nuclear navy and his engaging teaching style and enthusiasm got me thinking about nuclear engineering,” she recalled. Patino’s career choice was set.

To excel in the nuclear engineering courses Patino would go on to take at the University of Florida would require a solid grounding in mathematics. Here, too, Patino credits an SFSC instructor with keeping her focused.

“Professor J.J. Moyne was always accessible when I needed help with higher level math work,” Patino said. “Getting that level of personalized attention at a large university like Florida is not easy.”

Patino settled on the Gainesville-based university because it had one of the few undergraduate nuclear engineer programs in the southeast.

After three-years studying radiation dose testing and physical phantom creation at the University of Florida, Patino tailored her job search to openings in the Midwest and Northeast. “I love Florida, but at the same time I wanted to experience life in other states, especially areas where I could enjoy all four seasons.”

Patino got hired on by the Exelon Corporation, a Fortune 100 company that generates, transmits, and delivers energy in 48 states with 34,000 employees and $35 billion in revenues. She is learning the intricacies of nuclear power plant in Illinois.

“Because we are a nuclear power plant, keeping it running is a job that’s complex and carries a lot of responsibility,” Patino said. “This is an industry in which you are always training and always learning.”

Patino raves over her choice of Exelon Corporation. She said the company invests in its employees, expecting them to take on a fair amount of “vertical learning” to master operating a nuclear power plant.

She noted the energy sector is growing, offering careers in chemistry, engineering, and plant maintenance. Patino said she is particularly eager to talk up career paths in the technology sector to women.