AVON PARK, Fla.–Jan. 8, 2016–On a recent evening, Whitney Broadaway mounted the stage at a South Florida State College auditorium to talk about her career in art. She had returned to her alma mater to take part in a forum showcasing alumni of SFSC’s art program.

Broadaway, a museum manager, was joined by an art teacher, a landscape architect, a photographer, and a graphic artist—all gainfully employed.

At a time when Forbes magazine says art is one of the least valuable college majors, the career success met by Broadaway and her fellow alumni debunks the notion there’s no value in art education. 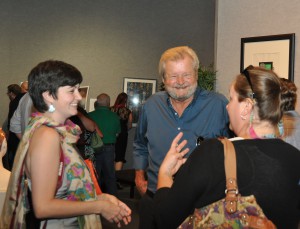 “I hope there are current students in the audience because I’d like to add a message of hope,” Broadaway said. “Being an artist is really hard but if you never stop making art you can make it happen.”

The 29-year-old Broadaway said she knew her future lay in the arts when she was making her way through Sebring High School, where she was a member of the art club and the drum major in the band.

“I always knew in the back of my head that I would work in the arts,” said Broadaway, from her office overlooking downtown Orlando at the Orange County Regional History Center, where she works as the collections manager for the art and historical items. “It wasn’t an epiphany but just something I knew I could and would do.”

In 2005, Broadaway enrolled at SFSC after graduating from high school, using her Bright Futures and other scholarships to cover her tuition. She took printmaking classes with Mollie Doctrow, an art instructor and the curator of SFSC’s Museum of Florida Art and Culture.

Broadaway said the class set her alight with a love for printmaking. “Studying under Mollie I felt as if she were making an investment in me as an artist,” said Broadaway. “She wasn’t just interested in us as art students but as people.”

After graduating from SFSC, Broadaway earned her bachelor in fine arts in 2010 from the University of Central Florida in Orlando. She concentrated in printmaking while also mastering the art of bookbinding, a skill she had first studied under Doctrow at SFSC.

Her new job brought the fourth-generation Central Floridian back to her roots in the city where her great-great-grandparents settled in 1893.

While printmaking was Broadaway’s passion, her bookbinding skills helped her land her first professional job. The UCF library and archives hired her as a book conservator immediately upon her graduation.

A full-time job at the library was a boon: Broadaway could hone her skills conserving rare books during the day and pursue printmaking in her off hours.

Four years into her job at UCF, the Orange County Regional History Center tapped Broadaway as its new collections manager.

“There are careers in the arts,” said Broadaway. “The focus may not always be on making lots of money, but nonprofit organizations as well as commercial enterprises need artists.”

Broadaway credited SFSC for promoting art education at time when, in some quarters, it is seen as a good elective but not a secure career path. She also showered praise on SFSC’s faculty. 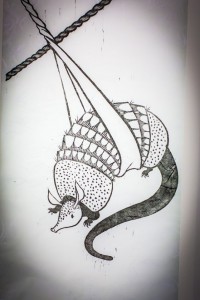 A representation of one of Whitney Broadaway’s most recent prints titled “Dillo Dangle”—an armadillo dangling from a string.

“Besides printmaking, I learned other genre from Cathy Futral, an amazing professor and an amazing artist in her own right,” said Broadaway. “Futral is the rock of the art department at SFSC. She takes a genuine interest in every student and we very much saw her as a mother hen, getting us ready for our next phase.”

When Broadaway is not tending to the collection at the Orlando museum, she watches over her first born child, a daughter, along with her husband of four years. They accompany her when she displays her prints at art festivals and shows throughout central Florida.

Broadaway employs the relief method of printmaking by drawing an image onto a block of wood, then carving the area around image in a process similar to making a rubber stamp. She mainly uses a hand tool but sometimes carves with an electric chisel. Ink is then applied to the relief and a press transfers the image to paper.

Broadaway’s prints have been on display in art shows throughout central Florida, including exhibitions at MOFAC.

Doctrow, who has taught at SFSC since 2005, organized the forum that brought Broadaway and other art alumni back to SFSC to motivate current students. “Our alumni inspire the campus, the community, and especially our current art students,” said Doctrow, who is herself an award-winning printmaker. “Seeing the success our alumni attain spurs our students on and gives them something to strive for.”

Graduates of SFSC art program often move on to earn a bachelor’s degrees in art before getting hired on in a professional position. One recent graduate, Cody Coltharp, earned a bachelor’s in fine art at New College in Sarasota. The Smithsonian Institution in Washington hired Coltharp in 2013 at its Hirshhorn Museum.

Another graduate, Max Gooding, went to the University of Florida where he studied landscape architecture. He now owns his own design studio in Naples, Fla., and has scored several commissions for high-end real estate projects.

“If you have a love for the arts and an intense passion for doing art you can make a career of it,” said Broadaway. “If you’re truly passionate about creating art, everything will fall into place and you’ll succeed.”