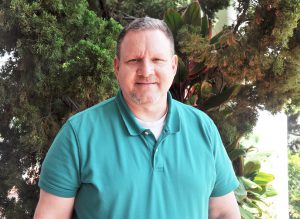 AVON PARK, Fla. – April 25, 2017 – On May 4, Steven Cullipher will graduate from South Florida State College with a Bachelor of Applied Science in Supervision and Management (BAS-SM) degree nearly 30 years after he finished high school.

Cullipher will talk about what brought him to SFSC and why he opted for a business degree when he delivers the student Commencement address at the first of two SFSC graduation ceremonies on May 4, at 4:45 p.m., in the Wildstein Center for the Performing Arts on the Highlands Campus in Avon Park.

“One thing that bothered me throughout my working years was that I never finished college,” Cullipher said. “I was doing well in my career but I knew in the end I could only go so far.”

For Cullipher, that career was theater and TV lighting. “Right out of high school, I enrolled in a collegiate arts school in North Carolina,” Cullipher, himself a Tar Heel native, said. “I picked up a knack for stage lighting and that evolved into the only line of work I did throughout my entire career.”

Cullipher moved to the metropolitan area of northern Virginia and Washington D.C., where, over the years, he mastered the art and technique of crafting expert stage lighting for sets in the entertainment business, hospitality industry, and special events, including those for presidents.

“I worked on a lot of cool projects, and it was good work,” Cullipher said. “And it did a good job of paying the bills.”

His career took him to New York City, where he advanced to lighting systems integration, helping to fashion the sets for the MSNBC network. Cullipher came to realize, though, that not having a degree was holding him back from promotion to a management-level position.

“I saw others inch up the career ladder,” Cullipher said. “They had degrees, and I didn’t.”

A temporary assignment to work on the Universal CityWalk theme park in Orlando brought Cullipher to the Sunshine State. He took a liking to central Florida, convincing his employer to let him set up a branch office in the area. But with two children making their way through elementary and middle school and no chance of making his way into management, Cullipher and his wife elected to move to a more tranquil setting where they could concentrate on raising their children.

In 2014, the Culliphers moved to Highlands County, which meant giving up lighting work, but freeing him to pick up where he left off years ago. “Going back to college was always at the top of my bucket list,” Cullipher said. “I went immediately to SFSC to enroll in classes with an initial goal of earning my associate degree, then a bachelor’s in business.”

Cullipher described his first semester as something of a “whirlwind.” “I was taking a full load of courses and playing the full-time dad role, which proved to be challenging,” Cullipher said. “But it was manageable and without a doubt worthwhile.”

After wrapping up his associate degree, Cullipher segued right into the BAS-SM program. He said it was a natural fit for him, given his many years in the lighting business.

SFSC launched its BAS-SM program in 2012, giving associate-degree holders an opportunity to earn a bachelor’s degree without traveling to Lakeland, Tampa, or Orlando.

In an odd way, Cullipher sees some benefit to having started his college studies with years of work behind him. “In the BAS-SM program, the instructors bring actual business experience into the classroom, and that made a big difference for me,” Cullipher observed. “Real-world experience was something I could relate to.”

Cullipher heaped praise on BAS-SM faculty. “The instructors at SFSC, professors like Dr. Tina Cardenas, have that real-world experience they shape into case studies, team projects, and role-playing exercises,” he said.

Cullipher credits Dr. Cardenas with nudging him to go after the student Commencement speaker role. “Some of my classmates tried to egg me on but I was hesitant. It was Dr. Cardenas who gave me a look that said ‘you should do this,’” he said.

“I’m going to talk about my story because I think a lot of folks will relate to being in a position where you’ve reached an impasse and have nowhere to go in your career, “ Cullipher said. “Folks can come up with so many reasons not to go back to college, but they’re almost always wrong.”

When he isn’t in class or watching over his children, Cullipher works for the Highlands County School Board as paraprofessional, providing in-class tutoring to elementary schoolchildren. With his degree in hand, he plans to continue working in education. His next step is to secure his teaching certificate. He has his an eye on earning a master’s degree as his next step in career advancement.

Cullipher also lends a hand to the Highlands Little Theatre, putting his decades of lighting experience to work for the acting company. He received the Gracie Award for Best Lighting Design for the theater’s production of “To Kill a Mockingbird.” “It’s nice to do theater for fun again instead it being my job” he noted.

“I suppose you can say I just like helping people,” Cullipher said. “Returning to college at SFSC has been an awesome experience for me and, with my education and real-world experience, I think I can bring a lot to the table helping others.”