The class of one woman and 10 men filed into SFSC’s University Center Auditorium on the Highlands Campus for the 7 p.m. ceremony and stood at attention while a color guard presented the Stars and Stripes. The auditorium’s seats were filled with family and well-wishers, including Susan Benton, Highlands County’s sheriff.

Before picking up their diplomas, the cadets, dressed in brown uniforms, heard a send-off speech from a guest chosen by the graduating class.

“Why do you want to be cops?” asked Mark Schrader, chief deputy for the Highlands County sheriff’s department.

“Like most, you’ll say you want to help people,” Schrader said. “That’s the best reason to be cop,” he told the graduates.

He sounded notes of caution throughout his 20-minute speech. He spoke of the physical dangers inherent in police work, the lack of respect cops receive from some quarters, and exposure to the underside of society. 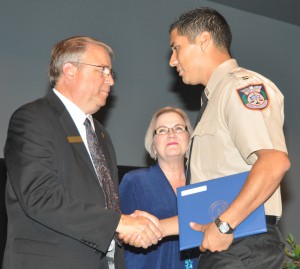 “Cops are the first on the scene when a child has been maimed, when a spouse has been abused, or when an innocent victim has been shot,” Schrader said. Out of it all, though, he told graduates, comes a sense of calling that is special to police work.

“You’ll have a noble feeling that you’ve done something to help someone,” he said.

Richard Morey, SFSC’s coordinator of criminal justice training, then called up the 11 graduates of the Basic Law Enforcement Program Class 244 to the stage to hand them their challenge coins, specially minted medallions that signify their achievement and bond as future law enforcement officers. SFSC trustees Kris Rider and Timothy Backer presented the diplomas.

Morey singled out Felix Moros and Esaul Hernandez for their achievements during the nearly six-month course. Moros earned top honors for his academic excellence while Hernandez scored the firearms award for his work on the shooting range.

Moros, who was tapped as class captain, took to the lectern to share his parting advice with his classmates.

“We used to be mechanics, retail salespersons, and college students,” Moros said. “Tonight we graduate 11 of the newest and finest law enforcement officers in Florida.”

“Being in law enforcement, though, is not about us. It’s about the community we serve,” he said.