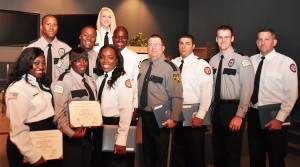 AVON PARK, Fla. – Nov. 4, 2016 – South Florida State College graduated 11 new corrections officers on Nov. 3, sending them off with words of advice, including advice for their families.

The class of seven men and four women, joined by their families, gathered at the SFSC University Center Auditorium on the Highlands campus in Avon Park to receive their diplomas and hear from a seasoned corrections official.

“Your first order of business at this graduation is to thank your families,” said Booker Johnson, a retired colonel with the Highlands County Sheriff’s Office. “They were there for you during your training, waiting for you when you got home after a rough day to hear what you had been through.”

Johnson told the cadets and their families the evening graduation ceremony was not an ending but a beginning. “These cadets end their training at SFSC tonight but next week they’ll start new careers to which they, and you, will be committed—hang in there with them,” Johnson told the assembled families.

Johson, a former corrections officer and law enforcement officer, urged the cadets not to forget the three “C’s” of corrections. He told them to keep always in mind to “care” well for their inmates, maintain firm “custody” to prevent escapes, and keep “control” of the inmates who always outnumber the officers on duty.

He singled out two cadets for their achievements during the 420 hours of instruction. Brubaker and Gaskins earned top honors for their academic excellence, the first time two cadets in one class earned the honor. Gaskins scored the firearms award for his work on the shooting range.

Brubaker, class leader, mounted the stage to share parting words with his classmates.

First, he thanked his fellow cadets for the support and respect they offered him, making his job as the class leader a pleasure.

“I won’t miss the examinations,” said Brubaker. “I won’t miss all the stress. I won’t miss getting pepper sprayed. What I will miss is your friendship.”