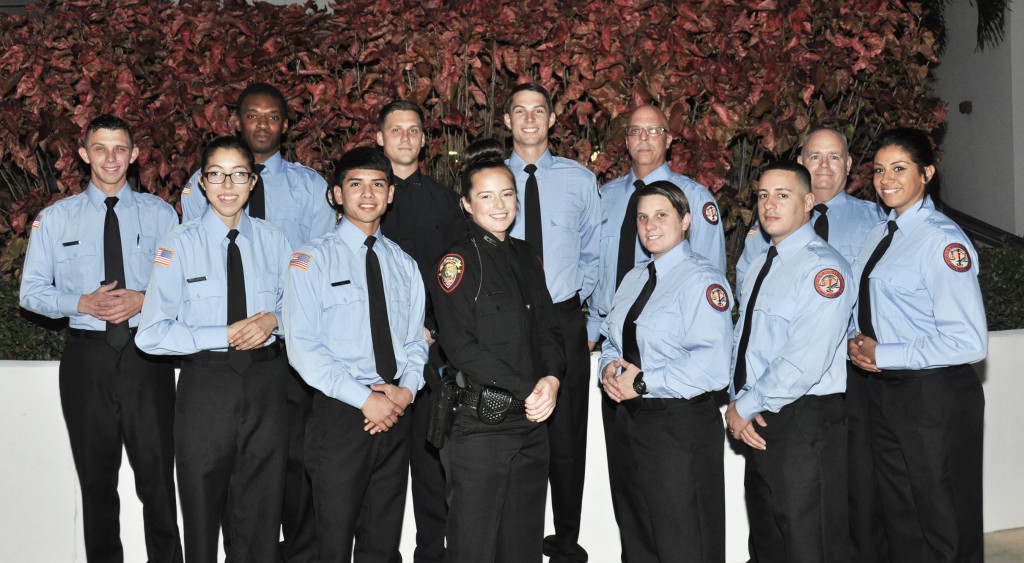 AVON PARK, Fla. – Dec. 14, 2016 – South Florida State College graduated a class of 12 law enforcement officers on Dec 13.  SFSC officials handed the graduates their diplomas, challenge coins, and advice, with some already having landed a job, even as they were handed their diplomas on stage.

The 12 cadets of Basic Law Enforcement Class 250 filed into the SFSC University Center Auditorium on the Highlands Campus for the 6 p.m. ceremony and stood at attention while a color guard presented the Stars and Stripes. The auditorium’s seats were filled families, well-wishers, and law enforcement officers from surrounding counties.

Before picking up their diplomas, the cadets heard a send-off speech from Christopher Gunter, a sergeant in charge of training for the Highlands County Sheriff’s Office. Gunter also serves as an adjunct instructor at SFSC, helping to teach the cadets during the 770 hours of state-mandated training.

“You’ve decided to travel on one of the most amazing career paths available to you,” Gunther told the graduates. “You will be looked to by the public to serve and to protect—it’s a career that will bring you a sense of accomplishment, excitement, and the most prideful moments in your life.”

Still, he sounded a note of caution in his remarks delivered from a stage on which he was flanked by area sheriffs and police officers. He told the cadets they will be “resented” by some simply for what they stand for by wearing the uniform of a law enforcement officer.

“You’ll find yourself in situations where you are the only person standing between law and order and total chaos,” Gunter said. “But have no apprehension because you will be able to perform your duties after the training you have received here.”

Michael Huften, SFSC’s coordinator of criminal justice training, then called up the 12 graduates to the stage to hand them their challenge coins, specially minted medallions that signify their achievement and bond as future law enforcement officers.

Beaming with a smile, Huften announced two graduates, Brandon A. Griesemer and Kaleigh Anderson had already passed their state certification examinations and landed jobs. Griesemer with the Okeechobee and Anderson with the Melbourne Police Departments.

Erik Christensen, dean of Applied Sciences and Technologies, then presented a diploma to each cadet, congratulating them on their achievement. Seconds after cadet Kevin Howell shook hands with Christensen, he walked passed David Hardin, the sheriff-elect of Glades County, one of the dignitaries on stage.

“Cadet Howell has a job with the Glades County Sheriff’s Office,” Hardin bellowed out, bringing the audience to applause.

Huften singled out two cadets for their achievements during the nearly six-month course. Blair Tomlin earned top honors for academic excellence. Griesemer scored the firearms award for his work on the shooting range.

Griesemer, who was tapped as class leader and will soon start patrolling Okeechobee County, had his badge pinned to his uniform by his fiancé Rebecca Priest whle on stage. He stepped up to the lectern to single out each of his fellow cadets with a compliment before thanking all the families and friends who had supported the class during the course.

From his fellow cadet who kept all on their toes to the one who helped others with study questions to the cadet who served as class clown, Griesemer acknowledged their graduation was a team effort.

For more information about the SFSC Criminal Justice Academy, which includes a program that prepares students for a career as a corrections officer, call the SFSC Advising and Counseling Center at 863-784-7313 or visit www.southflorida.edu.