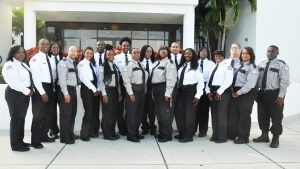 AVON PARK, Fla. – May 3, 2017 – South Florida State College graduated 18 new corrections officers on May 3, sending them off on their careers with words of advice from one of their own.

The class of six men and 12 women of SFSC’s Basic Corrections Class 17-192 gathered at the SFSC University Center Auditorium on the Highlands Campus in Avon Park to receive their diplomas and hear from a fellow corrections officer, who is also an alumna of the program.

“It took a lot of hard work for you to get to where you are right now—corrections officers ready for a new career,” said Kemoy Newman, a lieutenant at the Florida Civil Commitment Center in Arcadia. “Everyone here can trust me when I say that because I’ve been through what these graduates have endured for the past 11 weeks.”

Newman recounted her own experience at SFSC, recalling her time on the gun range, the day she was doused with pepper spray, the times of doubt when she wondered whether she would pass the course. “That journey was worth the hard work because here I am now a lieutenant only two years after leaving SFSC, and now you are about to embark on your journeys,” Newman said.

Johnson urged the graduates to adhere to high ethical standards, treat well those whom they watch over while in their custody, and place their trust in their fellow officers. “Each day will bring you a new problem,” she said. “Learn from it, grow from it, and move on from it.”

He singled out four cadets for their achievements during the 420 hours of instruction. Duchhow and Gaskin earned top honors for their academic excellence. Perkins scored the firearms award for achieving the highest score on the firing range. Jenkins walked away with the “Honor Award,” Austin said, for her hard work and determination.

Before dismissing the class, Daverne, who had served as class leader, thanked his fellow graduates for the comradery they extended to each, making his job a pleasure.

“Each instructor planted seeds in our lives since we came together in February,” Daverne said. “Let’s not stop simply being corrections officer but grow to become supervisors, lieutenants, and even wardens.”