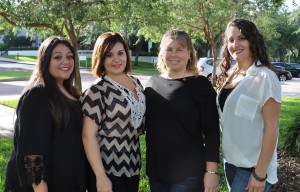 The graduates had completed SFSC’s Associate in Science (AS) degree in Radiography and will soon sit for their national board examinations, aiming to start their careers later this summer. Radiologic technologists work in hospitals and clinics performing diagnostic imaging examinations, such as x rays.

The guest speaker, Benjamin Carter, director Outreach and Academic Support at SFSC, offered words of advice to the graduates as they prepared to launch their careers.

Citing the words of Marie Curie, the French-Polish scientist awarded several Nobel Prizes for her ground-breaking work, Carter urged the graduates to strive always to reach the top of their careers.

“Don’t let obstacles stop you from achieving your goals,” Carter told the graduates, noting that Curie—credited with coining the word “radioactivity”— had overcome many hurdles in her life to reach the pinnacle of her profession.

“Always have an appetite for learning and make a point of continuously inspiring others,” Carter said.

Heidi South, the graduating class president, took to the lectern to thank families and friends in attendance for their support, encouragement, and love that saw her and her classmates through the two-year program.

“One of the most important things we learned was the value of compassion, South said. “As radiologic technologists, we often meet people when they are at their worst. They’re in pain and suffering, and that’s when we need to show not just empathy but compassion.”

Junior Gray, director of the radiography program, presented an award to Glenda Hernandez for academic excellence. South received an award for clinical excellence.

SFSC’s Radiography program is accredited by the Joint Review Committee on Education in Radiologic Technology.