With scores of family, friends, and well-wishers looking on from the seats of SFSC’s Theatre for the Performing Arts, the graduates, wearing traditional white uniforms, took to the stage, sitting 10 abreast under a large banner depicting the college’s seal.

They had just completed SFSC’s 11-month practical nurse program and will soon sit for their licensing examinations, looking to start hands-on work later this summer.

Craig Pyle, a critical care nurse at Highlands Regional Medical Center with 20 years of clinical experience, accepted the students’ invitation to serve as the guest speaker and offer them a glimpse of the challenges that await them.

Pyle, a graduate of SFSC, told the students that, while they work intensely in a one-on-one relationship with a patient, nurses are not solo practitioners.

“Nurses work best as part of a team,” Pyle said. “A team that includes physicians, technicians, aides, and other nurses too.”

“But you must never forget the patient, and the family, is an important part of that team.”

Pyle went on to tell the graduates that the responsibility for quality health care rests not solely with the nurses and physicians. He said patients shoulder a good share of that burden.

“The more the nurse does to educate his or her patients that they share in that responsibility, then the better outcomes they will have.”

The class president, Rani Gobble, then recalled the ups and downs of the students’ 11 months together, and marveled at how much they had learned.

“At the start of the course we thought we know how to wash are hands properly,” Gobble said. “Boy were we wrong.”

Saying they weren’t just a class but a pack that had forged special relationships among themselves, Gobble exhorted her fellow graduates to remember always how far they had come.

“Let us use what we have learned here and be the best nurses we can be,” Gobble said.

But before the class could take its turn observing ceremonies stretching back to the 19 century, they had an award of their own to confer. The class tapped Denis Morales, a staff assistant at SFSC’s nursing education program, as the recipient of the Golden Duck award.

Each graduating class of SFSC nursing students gives the award to a person who contributes in a special way to their learning and development as a nurse. The award’s significance is based on the D.U.C.K. motto: Developing, Understanding, Compassion, and Knowledge. 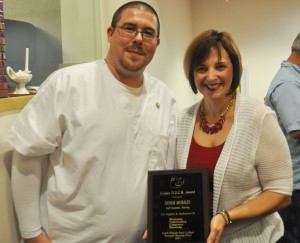 Continuing a custom initiated by Florence Nightingale, recognized as the founder of modern nursing, the graduating students then received their nursing pins, a symbol of their hard work and achievement.

In recent graduation ceremonies, students accept their nursing pins from a person of their choice, in most instances a relative who they see as a pillar of support in their lives.

The graduates, with the lapels of their uniforms now sporting their pins, then clasped a lighted white lantern. This tradition, a rite of passage also initiated by Nightingale, signifies the courage, compassion, selflessness each new nurse is called to, Dr. Michelle Heston, SFSC’s nursing program director, told the assembly.

The new nurses then filed off the stage into the audience to greet their loved ones.

In addition to the LPN program, SFSC also offers associate degree in nursing (ADN) options for students interested in becoming registered nurses: a two-year Generic-RN program and a one-year Transition-LPN to RN program. This year SFSC launched a Bachelor of Science Degree in Nursing (BSN), which can be completed in two years.

For more information on nursing at SFSC, visit the nursing education page at www.southflorida.edu or call 863-784-7225.