SFSC Honors Veterans under the Stars and Stripes 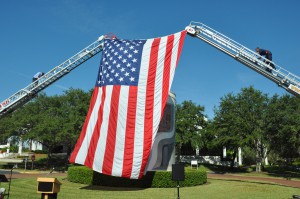 Firefighters complete the task of readying the flag before the start of the Veterans Day Remembrance ceremony on the SFSC Highlands Campus.

AVON PARK, Fla. – Nov. 14, 2016 – On Friday, the Highlands Campus of South Florida State College hosted its annual Veterans Day remembrance. The morning ceremony saw nearly 200 students, employees, and area residents come together to honor the veterans who were always at the ready to defend their country.

This year’s morning ceremony took on a dramatic air with the addition of an American flag, nearly measuring the length and breadth of a basketball court, suspended between two erect fire ladders.

As the enormous flag, which, at times, flies at the Boca Grande, Fla, estate of the George W. Bush family, fluttered in the wind above the lectern, a parade of speakers recalled to mind the service our veterans have given to the United States.

“On Sept. 10, 2001, I was fire chief in Long Boat Key, Fla., where then President George W. Bush visited on a trip to Florida,” said Julius Halas, the director of the Division of State Fire Marshal, the state’s chief firefighting officer. “Who would have known then what would happen just a day later.”

Halas added: “Thanks goes to our military and our veterans for protecting our country so that firefighters and other first responders could protect our communities—thank God for the service of our veterans.”

“When I was invited to speak today, they asked if I could squeeze into my old navy uniform,” Carey said. “I had to tell them it shrunk in the closet,” he said, adding a moment of levity to the solemnity that loomed over the morning.

“When I tell someone I’m a veteran, I often feel a bit awkward,” Carey noted. “Because I sometimes think a veteran is someone who has seen combat or come home injured.”

Carey, wearing a poppy on his lapel that has come to symbolize remembrance ceremonies here and in Western Europe, told the audience: “I just say I was doing my job. Something I’ve heard even injured veterans say as well. So, I believe that being a veteran means being humble.”

Dr. Cary Pigman, a member of the Florida House of Representatives, followed Carey, delivering remarks that gave the audience pause to think about the hours-old election.

He spoke, at first in an oblique manner, about an election that nearly tore the nation apart, one that pitted American against American. But one in which the acrimony subsided with the peaceful transition from one president to the next.

Dr. Pigman surprised to the audience when he said he wasn’t talking about Tuesday’s General Election, but the election of 1800, in which a bitterly divided young republic chose Thomas Jefferson over John Adams.

Pigman’s message: “When faced with the challenge of accepting the recent election, we realize we are all Americans first. So, let us celebrate our coming together and on becoming a great nation on this day that we celebrate our veterans.”

The ceremony ended on a prayerful note. Ben Carter, SFSC’s director of Outreach and Academic Support, read Psalm 91, known to many as the warrior psalm.

With the conclusion of the psalm’s reading, members of the Knights of Columbus, led by the Sebring Police Department guard, began a procession of those assembled on a remembrance walk that wound its way through the quiet pathways of the SFSC Highlands Campus.