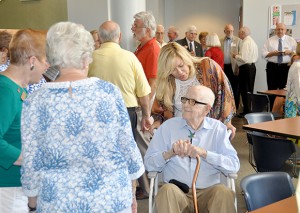 AVON PARK, Fla.–May 21, 2015–John Dziewiatkowski, a former South Florida State College employee, drove down from Michigan. For Jim Brooks, a former trustee, it was a hop from Avon Park. Dr. Elver Hodges, 102 years old and a college founder and trustee, came from Wauchula.

On Thursday, they joined 75 other college retirees and current and former trustees for a luncheon to celebrate SFSC’s 50th anniversary. The gathering was one of a series of yearlong events to commemorate the college’s founding in 1965.

Receptions were held the night before at the Hotel Jacaranda as well as prior to the luncheon at the SFSC Highlands Campus, giving current employees a chance to swap stories and catch up with old friends and colleagues.

The group settled down to lunch provided by the Palms of Sebring as part of its 55 Acts of Kindness. The retirement community is sponsoring community events throughout the year to showcase its 55th anniversary.

“If it weren’t for you, this place wouldn’t exist,” Dr. Catherine P. Cornelius, told those who had gathered in the SFSC University Center for lunch. “You’ve helped make this the fine institution what it is today, which in my mind is the best in the state.”

Dr. Cornelius recognized Dr. Hodges, who served on the first board of trustees. SFSC’s second president asked him, “How old are you, Dr. Hodges, if I may ask?” Raising his hand to gesture numbers with his fingers, he said, “O 2.” “That a hundred and two,” said Dr. Cornelius to the applause of the other guests.

After lunch, the guests assembled in the SFSC University Center Auditorium to hear a selection of songs from the early 1960s performed by business instructor Adam Martin and retiree David Hale.SFSC’s current president, Thomas C. Leitzel, followed up with a presentation highlighting the accomplishment for 2014 and on his vision for SFSC.

“Change is happening now and we have to prepare our students for the future,” Dr. Leitzel said. He noted that more than a dozen high-demand jobs today did not exist 10 years ago.

He thanked those who had brought the college to where it is today, including SFSC’s third president, Dr. Norman L. Stephens Jr., who was listening in the audience. “You’ve passed the baton on to us, and now we have to run with it.”