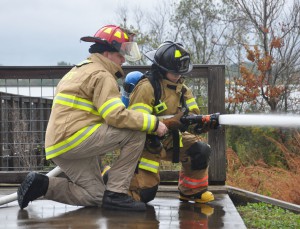 SFSC instructor Eric Hanks (left) works with a recruit on the proper technique for deploying a hose.

AVON PARK, Fla.–Feb. 1, 2016–Firefighters have played a storied role in American society. Few professions can match the esteem with which firefighters are held by the public.

Now, Heartland residents can turn to South Florida State College to earn the credentials needed to work as a career firefighter in Florida. SFSC launched its fire science program in the fall of 2015, enrolling 11 recruits.

In November, the State Fire Marshal gave SFSC’s program its stamp of approval, placing it on Florida’s list of approved firefighter recruit training providers. SFSC now joins 42 training providers across the state in offering the two-part course, including 15 of Florida’s state colleges.

The Florida Legislature, at the urging of State Senator Denise Grimsley, appropriated $2.6 million in 2014 for SFSC to refit existing classroom space, build a water and fire tower, and acquire the equipment to open the program on the college’s Highlands Campus.

“Our fire science program was a dream of our community that was a long time in the making,” said Kevin Brown, SFSC’s dean of applied sciences and technologies. “We’ve received tremendous support from the community getting this program up and running, including essential equipment from the Hardee County commission and the city of Frostproof.”

SFSC wrapped up the construction and hired instructors in time to enroll the inaugural class in September 2015. The class will graduate in early April.

“Steve Ashworth, our fire science chair and the instructors, have done a great job in getting this program ready for our first class of recruits,” Brown said. Ashworth organized the site work, aided in drafting building plans, and ordered training equipment.

The state requires career firefighter recruits to complete a two-part training program. The initial 206-hour phase of the course covers the fundamental knowledge and skills to work as a member of a firefighting team, permitting graduates to work in a volunteer fire department. A second 192-hour course gives recruits the added skills set to work as career firefighter in a county and city fire department. 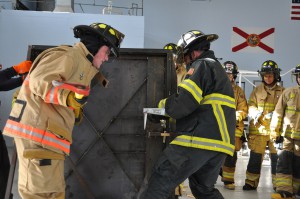 Prior to SFSC starting its program, area residents had to travel to Bradenton, Tampa, or Winter Haven to enroll in the complete state-approved course.

Last week, Eric Hanks, one of a cadre of adjunct instructors, was at the new fire science training site with the 11 recruits, teaching them how to breach a shuttered door. When not on campus, Hanks, a Lake Placid resident, commutes to Boca Raton to put in a 24-hour shift with that city’s 216-member fire department.

“These folks are going a great job,” said Hanks, who is also a certified as a paramedic. “They’re like sponges; they soak up everything we teach.”

The 11 recruits, four of whom are women, represent a range of backgrounds. Some are career paramedics looking to move into firefighting. One, only a few years out of high school, wants to fulfill his dream of fighting fires. Two recruits are married to each other.

Haines City residents George and Cheryl Bailey, work as paramedics for Polk County’s fire and rescue service. The couple wants to take the next step up the career ladder. They said the new program at SFSC, like their marriage, was a great match for them.

“We looked into SFSC’s program and it worked out well for us,” said 43-year-old George Bailey. “We thought it would be great way of backing each other up by taking the course together,” he said, with Cheryl, his 37-year-old wife, nodding in agreement.

Wauchula resident Cole Choate, a 20-year-old graduate of Hardee Senior High School, is looking to start a career in firefighting.

“Right now I am just eager to graduate so that I can get in with a fire department,” said Choate. “I hope it’s a local department, but that’s not necessary.”

The class trains with the latest technology to mimic real-life situations. Recruits practice firefighting techniques in a 44-foot-tall fire tower that simulates structure fires, including a stove fire with flashover. They learn hose pulling and team work using two fire engines, each of which has seen service with area fire departments.

Entry into SFSC fire science program requires candidates to have a high school diploma or its equivalent, pass a background check, and demonstrate a level of physical fitness needed to carry hoses, saw though a roof, and pull an injured person to safety.

Members of volunteer departments who have already completed the initial 206-hours of training with another provider can enroll in SFSC to complete the second phase of the training, commonly known as Firefighter II.