SFSC Named One of Most Promising Places to Work

AVON PARK, Fla.–May 26, 2015–South Florida State College received recognition as a Most Promising Place to Work in the first of its kind survey of America’s community and technical colleges released this week.

SFSC joins 15 other colleges receiving top marks for the extent to which diversity and inclusiveness imbue its administration, work environments, and hiring practices.

“This recognition confirms a commitment made by our trustees and college leaders to support an inclusive posture in all hiring decisions,” Dr. Thomas C. Leitzel, SFSC’s president said, reacting to the release of the survey.

SFSC earned a grade of A for its general diversity policies and staff human resources practices.

The National Institute for Staff and Organizational Development (NISOD) and the magazine Diverse commissioned the survey in 2014. This year’s survey results mark the two organizations’ inaugural listing of the nation’s most diversity-friendly colleges. 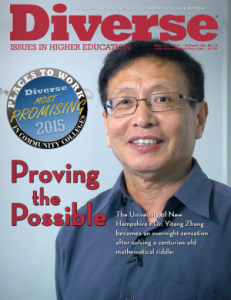 The magazine’s editors noted that SFSC is “considered to be one of the most comprehensive colleges in Florida,” with its offerings of three bachelor’s degrees, two-year transfer degrees, and workforce training programs.

The Ohio State University’s Center for Higher Education Enterprise (CHEE) conducted the survey and analyzed the results for NISOD and Diverse, which reports and publishes on diversity, access and opportunity in higher education. The CHEE researchers looked at a range of variables to determine top scoring colleges, including salaries, employee demographics, and hiring strategies.

“I am extremely excited about this year’s honorees,” said Dr. Edward J. Leach, NISOD’s Executive Director. “These community and technical colleges are very deserving of this recognition because of their outstanding work to enhance equality, diversity, and inclusion across their campuses.”
NISOD says the prestigious recognition can be used by recipients to promote their commitment to providing campuses where all individuals and groups feel welcomed, respected, and valued.

SFSC will receive official recognition of its achievement at NISOD’s annual International Conference on Teaching and Leadership Excellence in Austin, Texas, later in May.

Award recipients will also be provided with a specially designed logo they can use to promote their institutions’ commitment to diversity during student and staff recruitment efforts.

Ralph Newell, vice president of business development and technology for Diverse, noted his excitement that the colleges making the list don’t have national name recognition.

“You don’t have to have a big name to succeed and do great work,” he said.