AVON PARK, Fla.–May 3, 2016–South Florida State College’s Network Security Program was recognized by the networking industry leader for providing the best delivery of its Internet of Everything (IoE) curriculum. 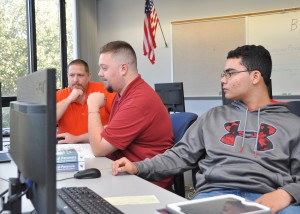 Brian Bohlman (left) with students in his classroom.

Cisco System’s Networking Academy singled out SFSC for recognition from among colleges throughout the United States and Canada with computer networking programs.

The IoE, more often referred to as the “Internet of Things,” describes the networking of objects—home appliances, cars, buildings, animals or humans—embedded with computer processors, software, and sensors that enables them to collect and exchange data over the internet.

A homeowner might use the IoE to remotely control the operation of home appliances, keep tabs on grandparent’s heart monitor, or exchange data with the pool service company on the water’s condition.

With “if it can be connected, it will be connected” increasingly becoming the norm, analysts expect the IoE to reshape global commerce.

“In an economy where the Internet of Everything will play a greater role, IT skills will matter in more job functions,” said Brian Bohlman, instructor of networking technologies and digital forensics. “The Cisco certification serves as a stamp of approval that students coming to SFSC will leave with the skills they need to succeed in our evolving economy.”

Cisco estimates the IoE will account for $19 trillion in global economic activity over the next decade.

The annual Cisco Academy Curriculum Excellence award is presented to one institution in each region for achieving excellence in teaching a curriculum. The Cisco Networking Academy program said it uses a rigorous process to select academies for this award.

Bohlman said SFSC added the Cisco curriculum to its network security program so that students can learn cutting-edge technology and identify changing trends.

The Cisco Networking Academy, a program of Cisco Systems, is an IT skills and career building initiative that partners with learning institutions worldwide to enhance computer networking education.

For more information about SFSC’s Network Security Program at SFSC, contact Bohlman at bohlmanb@southflorida.edu or call the SFSC Advising and Counseling Center at ext. 7131.