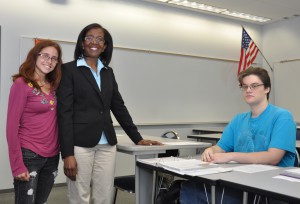 AVON PARK, Fla.–April 20, 2016–Dr. Sonji Nicholas, sociology instructor, received word that she has been selected for a Fulbright-Hays Seminar Abroad.

She will join 15 scholars this summer for a one-month stay in Senegal, a country of 13 million people nestled at the westernmost point in Africa.

“Senegal enjoys a special position among African nations,” Dr. Nicholas said. “The country has not seen the discord and violence that has surfaced in other states across Africa.”

Dr. Nicholas said she and her colleagues will use their time in Senegal to examine what’s particular to Senegalese society and culture that correlates with the harmony found among its diverse population.

“Three ethnic groups compose the bulk of Senegalese society,” Dr. Nicholas said. “The Mandinka, Wolof, and Fulani all live in relative peace that contributes to a stable society.”

Dr. Nicholas submitted an extensive application to the U.S. Department of Education last year, laying out a plan of study and what she expects to incorporate into the classroom curriculum after her stay in Senegal.

“An important part of this seminar abroad is what the scholars bring back to their home campuses and community,” Dr. Nicholas said.

The Fulbright-Hays Seminars Abroad program provides opportunities for overseas experience for educators with responsibilities for curriculum development in the humanities, languages, and area studies. Topics and host countries of the seminars vary from year to year.

Dr. Nicholas will teach an Honors course on marriage and the family at SFSC in the fall that will revolve around much of what she learns while in Senegal.

This summer’s trip to West Africa won’t be a first for Dr. Nicholas. She and a group of similar-minded academics traveled to Senegal in the late 1980s to explore subjects they had studied as a group while undergraduates.

“I remember the Senegalese people as friendly and warm,” Dr. Nicholas said. “Senegal was a colony of France, and its capital, Dakar, is still known as the Paris of Africa.”

She will meet up with her colleagues in Boston for a week of preparation. They fly from there to Dakar, where they will work from the West African Research Center.

“The Fulbright-Hays Scholar Award is prestigious in the academic community,” said Michele DeVane, the chair of the Social and Behavioral Science Department at SFSC, Nicholas’s home department. “Only 16 professors throughout the nation were chosen for this award. This is quite an honor for Dr. Nicholas and SFSC.”

Dr. Nicholas completed her undergraduate work at Howard University in Washington, D.C. She went on to earn a master’s degree in African studies at the State University of New York at Albany. She was awarded her doctorate degree in sociology from the Graduate Center of the City University of New York. Her areas of expertise center on the sociology of the family, race, ethnicity, and social stratification.

The results of Dr. Nicholas’s studies in Africa won’t be confined to SFSC’s classrooms. One of the requirements of the award entails sharing what’s learned with the wider community.

“I’ll definitely give some public talks for the residents of our service area,” she said. “I’ll publish on what I discover in Senegal, too.”