AVON PARK, Fla.–Nov. 12, 2015–On Wednesday morning, nearly 200 students, employees, and area residents crowded around the flagpoles at South Florida State College’s Highlands Campus to honor the veterans who have served their country in war and peace.

Clad in his white uniform, Eric Christensen, a retired commander in the U.S. Navy and professor of physics, served as the master of ceremonies for the hour-long procession of speeches, songs, and prayer that marked SFSC’s annual Veterans Day ceremony. 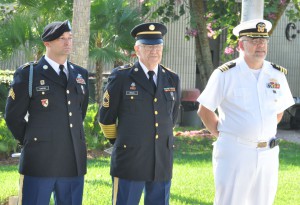 On hand were veterans who fought in World War II, the Korean War, the Vietnam War, and the wars in Iraq and Afghanistan.

Sporting a red, white, and blue outfit, Barry Vincent Smith took part in the ceremony from her wheelchair. During World War II, Smith joined the effort to defeat the Axis powers by enlisting as a WASP, or Women Airforce Service Pilot. She was one of more than a thousand women who flew non-combat missions in the U.S., freeing men to fly fighters and bombers on the frontlines.

She and all the WASPs were awarded the Congressional Gold Medal in 2009 for their service to the war effort that saw the defeat of the Nazis and Japanese.

“This is a wonderful, splendid day,” said Smith, shielded from the sun with umbrella. “I’ve put out dozens of flags around my house, so many I lost count.”

SFSC student Shawn Owens, a U.S. Army sergeant who completed tours of duty in Iraq and Afghanistan, mounted the podium in his dress blues to share his thoughts on what it means to be a veteran.

“When I was asked to talk about what it means to be a veteran, I didn’t realize how hard it would be to put it into words,” said Owens. “Once I started to think about my own family who served, my brothers in arms, I realized being a vet means answering the call of your country, being courageous, being brave, and enduring whatever you must for the love of your country.”

Owens will accept his associate degree in December. He plans to finish his undergraduate degree in psychology at Florida State University and pursue graduate studies in social work.

“I want to serve my fellow vets who suffer from post-traumatic stress disorder and earning a degree in social work is one way of do just that,” Owens said, with his wife, Annette, by his side. She runs a weekly support group for families with a husband, wife, or child serving far from home.

Dr. Cary Pigman, a member of the Florida House of Representatives, delivered the keynote speech. Pigman is an emergency room physician at Florida Hospital Heartland Medical Center who served in the U.S. Army and the Navy. He recounted the Battle of Chosin Reservoir during the Korean War, a harrowing engagement that pitted U.S. troops and allied soldiers against a larger contingent of Chinese forces. The battle, which resulted in 17,843 American casualties, was a turning point in the war.

Pigman’s message: America’s veterans endured cold, hunger, and death then as they do today. If needed, they will do so again.

A measure of levity fell to Laura Wade, an adjunct instructor in adult education. In a musical tribute to the four branches of the military, she sang the Marines’ Hymn, “Anchors Away,” and the Air Force and Army songs.

The ceremony ended on a prayerful note. Ben Carter, SFSC’s director of outreach and academic support, read Psalm 91, known to many as the warrior psalm. Afterward, the color guards of the Knights of Columbus and the Avon Park High School Air Force Junior ROTC led a remembrance walk from the circle to the Learning Resource Center and back.

With the ceremony over, students huddled around many of the veterans, peppering them with questions about their service.

Milton Krom, teasingly coaxed the students into guessing his age. The World War II veteran, who served in the First Infantry Division, had no qualms about admitting that he is 96. Many of the students took selfies with the ageing veterans, who clearly enjoyed the attention.

A few instructors had assigned their students to engage the veterans in structured interviews as part of a class assignment. Yvonne Rosario, in her first semester, asked Owens a list of questions she had fixed to her clipboard. Even though several students had already cornered the sergeant before Rosario had her turn, Owens, dripping with sweat, gladly took her questions.

By noon’s arrival, nearly everyone had returned to their routines, except for a few stragglers who had retreated to the shade.