Student Advisor Aims to Keep Helping for the Long Haul 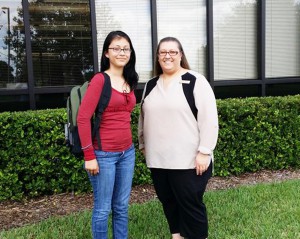 Laura Wilder (right) with a student on the DeSoto Campus.

AVON PARK, Fla. –June 15, 2016 –Laura Wilder has been with South Florida State College, literally, from the ground up.

In 2001, Wilder was working toward her associate degree at SFSC’s campus in DeSoto County. At that time, located in the Fountain Plaza shopping center in the center of Arcadia, the campus was a mere three classrooms, one office, and a small room that housed the library.

“A part-time opportunity opened to work as evening staff assistant,” said Wilder. “SFSC offered me the job and I said ‘yes,’ thinking it would be a good way make ends meet while I was taking classes.”

Now, 15 years later, Wilder has worked her way to student advisor and watched SFSC build out a campus that houses ample classrooms, computer labs, a library, and her own office. Along the way, she has earned accolades from her supervisor and the students she serves.

At a time when job hopping is becoming the norm, Wilder’s longevity with SFSC harkens to a day when workers spent their entire careers with one employer. Today, younger employees work fewer than three years with an employer, according the data from the Bureau of Labor Statistics.

Wilder first came to SFSC’s storefront campus 17 years after graduating from high school. She had hit a rough patch in her life. “I needed a new direction. I visited the campus at Fountain Plaza and met Effie Keen, the campus director, who helped get me get started on my educational journey,” Wilder recounted.

“I was taking classes while working part time at the campus,” Wilder said. “So I witnessed the construction of the new campus in 2003 and even took my last classes there.”

“After Fountain Plaza, the new campus was another world,” Wilder said. “We went from no space to a campus that could absorb increased enrollment, more classes at different times, and new programs. And I got to experience it not only as a student, but as an employee, and member of the community.”

Wilder completed her associate degree shortly after SFSC opened the new campus. She soon was brought on as a full-time staff assistant. “Being a student with SFSC launched my career working in higher education. It’s been an absolute blessing for me.”

The new campus wasn’t just a boon for Wilder, the residents of DeSoto County were ecstatic, according to Wilder.

“The reaction was one of shock and awe, but in a positive way,” Wilder said. “The community was thankful for the opportunity for more classes that were convenient. Also, SFSC could offer more programs.”

Working full time and caring for a family didn’t stop Wilder from eyeing career advancement. She completed her bachelor’s degree in business at Warner University in Polk County.

“Finishing my bachelor’s degree opened a path for me to move up the ladder at SFSC,” Wilder said. “My bachelor-level coursework gave me the skills to work one-on-one with students, helping them chart their educational choice.”

Wilder said her experience as a new student, one who walked into SFSC not knowing where to start, gives her insight into helping the people, young and not so young, who visit the SFSC DeSoto Campus looking to jump-start a career.

“A good part of what I do involves talking to folks new to SFSC,” Wilder said, explaining her typical day. “Prospective students come in, and I’ll ask them to sit down so that we can talk about educational opportunities that will lead to a career they will find rewarding.”

Advising new students centers on developing a degree outline detailing what classes they have to take to attain a degree or college-level occupational certificate. Her work with students also includes guiding students through the maze of the financial aid application process, including the scholarships available to them from the SFSC Foundation.

“One aspect of my role is to ensure students get plugged into SFSC’s established support network,” Wilder said, referring to the college’s array of student support services that offer personalized guidance designed to keep students focused on program completion.

“In short, I suppose one can say I help students lay the foundation to attain their long-term goals,” Wilder said. “It’s wonderful talking to new people from all walks of life and see how excited they become once they know a future awaits them at SFSC.”

Wilder is the only student advisor assigned to the SFSC DeSoto Campus. When she’s not on deck ready to help a student, Demers will step in to fill the void.

“Laura is a true asset to the college,” said Demers. “She has a way with students that makes them feel at ease, which in turn allows her to guide the student through their college and life goals.”

Wilder said she never forgets the hurdles she ran up against before she got her start at SFSC. “I feel a tremendous sense of accomplishment when I help someone get on the right path,” Wilder said. “I know what folks are going through because I’ve been there myself.”

When Wilder is not meeting with her students in Arcadia, she’s traveling to visit her three grandchildren. “I’ve have two granddaughters— ages 5 and 4— and grandson whose first birthday is in July,” Wilder said with noticeable glee. “My husband and I travel to Bradenton and Panama City to cram in as much time as we can to be with the little one.”

“I overwhelming credit SFSC for giving me the opportunity not only to start as a student, but as an employee— they set the tone that put me where I am at today” Wilder said. “SFSC turned my life around.”