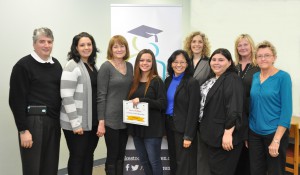 AVON PARK, Fla.–Jan. 26, 2016–On Jan. 25, Sierra Pelham arrived at the Highlands Campus of South Florida State College expecting to fulfill a routine request. But she got the surprise of her life.

Pelham, a senior at SFSC’s Collegiate High School in DeSoto County, had been asked to visit a classroom to talk about her time in a program for students at risk of dropping out of high school.

Instead, a stunned Pelham entered a room to find SFSC president Dr. Thomas C. Leitzel, college and DeSoto school board staff, and her mentor from Take Stock in Children (TSIC) waiting to break the news she earned a $40,000 Leaders 4 Life college scholarship from Asofsky Family Foundation. TSIC is operated by the SFSC Foundation.

Wiping away tears, Pelham struggled to find words for those on hand to congratulate her.

“My family never had much money,” said Pelham, with a voice choked with emotion. “Now I am going to college without money worries.”

Pelham was one among six students statewide who were tapped to receive the scholarship, an award that covers non-tuition expenses like housing, books, and transportation. Pelham already has her tuition covered by a TSIC scholarship.

The Leaders 4 Life scholarship is an initiative the Asofsky Family Foundation, which supports programs aimed at helping the state’s youth. The foundation awards the scholarship in partnership with TSIC.

Pelham was eligible for the fellowship because of her participation in the local TSIC program. The program matches students at-risk of not completing high school with mentors who guide them toward earning their diplomas, with college scholarships awaiting those who graduate and enroll in college.

Irene Castanon, who heads up the SFSC’s TSIC program said Pelham’s academic achievement and leadership on campus were key to her success in earning the scholarship.

“Pelham has been an active in the National Honor Society, music theater, and the robotics club,” Castanon said. “What’s more, she has shown leadership off campus by volunteering for Habitat for Humanity for the past three years.”

Pelham has already gained admission to the University of Central Florida, where she will work toward a degree in social work, with plans to pursue a graduate degree in public administration.

“My ultimate goal is to start a program to help students with parents who suffer from substance abuse,” said Pelham when asked about her plans for the future. “I want to help young people in the same way that Take Stock in Children helped me,” she said as she fought back tears.

Pelham has earned a 4.28 grade point average at the SFSC Collegiate High School and placed in the top 5 percent of her graduating class. When she graduates this spring, she already will have earned 60 college credit hours through SFSC, giving her a two-year advantage over her peers also heading to UCF.

The SFSC Collegiate High School is an initiative between the college and DeSoto school district that allows students to complete their high school diploma at an SFSC campus while simultaneously earning college credits or an occupational certificate. SFSC has similar arrangements with Hardee and Highlands counties.

“This is a huge accomplishment and you deserve it,” said Jamie Bateman, SFSC’s executive director for institutional advancement, who oversees the SFSC Foundation and the local TSIC program. “We are touched that someone as deserving as you will represent SFSC.”

Ellen Sutphin, who recently retired after 37 years teaching in DeSoto County schools, has served as Pelham’s mentor since she entered the seventh grade. Sutphin said she had to be on hand to see Pelham receive her award.

“She has been a dedicated student ever since I met her in elementary school,” said Sutphin. “She has been determined to go to college and make something of herself so that she can help others overcome obstacles.”

TSIC mentors typically meet with their assigned students each week during the schoolyear, offering encouragement, advice, and a sympathetic ear. A TSIC college success coach provides support and guidance to the mentor and the mentee.

Pelham’s selection from among 90 scholarship applicants also brings her a MacBook Pro laptop. She will travel to Tallahassee in February for a formal ceremony arranged by the Asofsky Family Foundation that will include state legislators and educators.

Also, on hand to give Pelham hugs and congratulations were Kris Rider, an SFSC district board trustee, her instructors from DeSoto County, and TSIC staff.

Before long, though, Pelham looked at the clock. She had leave so that she could make it to her next class.

Thanking all those who had come to surprise her with the news of her scholarship award, Pelham said she would never forget the day. But with an eye toward the future, she had parting words for everyone.

“I just want to help others in the same way I’ve been helped,” said Pelham.