AVON PARK, Fla. – Feb. 3, 2017 – On Feb. 1, Maria Gloria arrived at the Lake Placid High School expecting a typical day. Instead she got the surprise of her life.

Gloria, a senior at Lake Placid High School, had been called to a meet with school staff for a routine meeting. 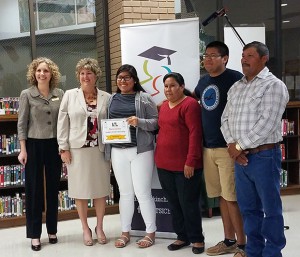 Instead, a stunned Gloria entered a room to find SFSC administrators, Lake Placid High School staff, and her mentor from Take Stock in Children (TSIC) waiting to break the news she earned a $40,000 Leaders 4 Life college scholarship from the Asofsky Family Foundation. TSIC, a mentoring program for middle and high school sttudents, is operated by the SFSC Foundation.

“I just can’t believe this is happening,” said Gloria, stunned and visibly shaken, as she was handed flowers and glancing toward her parents.

Gloria was one among six students statewide who were tapped to receive the scholarship, an award that covers non-tuition expenses like housing, books, and transportation. Gloria’s tuition will be covered by a separate TSIC scholarship she will earn when she graduates in May.

The Leaders 4 Life scholarship is an initiative of the Asofsky Family Foundation, which supports programs aimed at helping the state’s youth. The foundation awards the scholarship in partnership with TSIC.

Gloria was eligible for the fellowship because of her participation in the local TSIC program. The program matches students at-risk of not completing high school with mentors who guide them toward earning their diplomas, with college scholarships awaiting those who graduate and enroll in college.

Irene Castanon, who heads up SFSC’s TSIC program said Gloria’s academic achievement and leadership on campus were key to her success in earning the scholarship.

“Gloria is graduating among the top ten in her class and she serves as the vice president of the student government association and was elected her class president,” Castanon said.

Castanon said Gloria has applied to both Florida State University and the University of Florida, and has her hopes set on going to Gainesville next fall.

On hand to share in the surprise announcement were Gloria’s mother and father, Esmeralda Avila and Omar Gloria, including her brother Omar Gloria. Also watching was Gloria’s TSIC mentor Pamela Karlson, who practices law in Lake Placid and serves as the attorney for SFSC’s District Board of Trustees. Karlson started mentoring Gloria when she was in the seventh grade.

“Mrs. Karlson has been such an amazing inspiration to me,” Gloria said. “She’s a lawyer and I want to follow her example and practice law when I finish my studies.”

Gloria participates in SFSC’s dual enrolled program at Lake Placid High School. The program offers students the opportunity to complete their high school diploma at an SFSC campus while simultaneously earning college credits or an occupational certificate. SFSC has similar arrangements with Hardee and Highlands counties.

“This is a huge accomplishment and you deserve it,” said Jamie Bateman, SFSC’s executive director for institutional advancement, who oversees the SFSC Foundation and the local TSIC program. “We are touched that someone as deserving as you will represent SFSC.”

TSIC mentors typically meet with their assigned students each week during the schoolyear, offering encouragement, advice, and a sympathetic ear. A TSIC college success coach provides support and guidance to the mentor and the mentee.

Gloria’s selection from among 90 scholarship applicants also brings her a MacBook Pro laptop. She will travel to Tallahassee on March 7 for a formal ceremony arranged by the Asofsky Family Foundation that will include state legislators and educators.