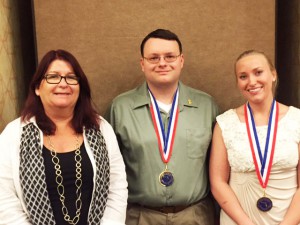 Each year, the Florida College System names an All-Florida Academic Team to honor the most outstanding students for their academic achievement, leadership, and service to the community.

The five students were recognized at an awards ceremony on April 21 in Tampa. The SFSC students earning the recognition were Mathew Estima, Roxanne Guerndt, Celina Nuevo, Christian Reitnauer, and Erica Roberts. They joined 122 of their peers from 26 colleges of state’s 28-member FCS in being named to the academic team.

“I am proud of these students for their academic achievements that led to being named to the All-Florida Academic Team,” said Florida Commissioner of Education Pam Stewart. “Florida colleges are known throughout the nation for their educational excellence, and I am pleased they have prepared these students for success now and in the future.”

The students attended a luncheon where they were presented with a medallion recognizing their achievements. SFSC President Dr. Thomas C. Leitzel, and Kimberly Hemler, the college’s Honors Program advisor, were on hand to watch the students receive their awards.

“We are proud of the outstanding achievement of our Honors Program and Phi Theta Kappa members and glad to see them honored in this way,” said Hemler, whose main role at SFSC is adviser to students at the Advising and Counseling Center on the Highlands Campus.