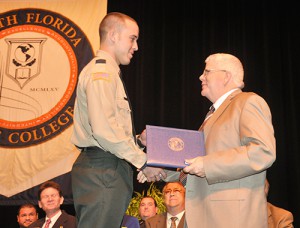 Mark Anthony Cintron, Amazing Grace Ministries of Wauchula, was invited by Class 242 to give the invocation and benediction for the program, BLE Academy 244 posted the colors, and Michael Barger gave parting words as class leader on behalf of the graduating class.

Before receiving individual awards and certificates, cadets and guests listened to keynote speaker Officer David Hernandez, Lake Wales Police Department, share wisdom from his own career experiences and remind cadets about the commitment, honesty, and integrity required to be a law enforcement professional. He also thanked the families and friends who supported the cadets and the instructors who provided important training to prepare them to transition into service as a public safety officer.

“Make sure you hold yourself to a higher standard,” Hernandez said. “Remember to stay vigilant, stay grounded, and remember you’re not the only ones affected by this career. The people that supported you through this academy will support you throughout your career.”

Special awards were presented to Brad Webster for “top firearms score” for completing 194 out of 203, Trevor Smith had the “top academic score” with a final grade of 96 percent, and “class leader” was presented to Michael Barger.

“Basic Law Enforcement Academy, Class 242, was an evening academy, running for over 44 weeks, 11 months of training,” said Richard Morey, coordinator, criminal justice. “That kind of commitment, wiliness to learn, and sacrifice away from their families’ shows the professionalism of those who attended. They did a great job and should make fine officers serving their communities.”