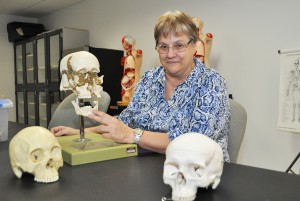 Dr. Cover is now in her fifth year teaching biology at the DeSoto and Hardee county campuses of South Florida State College. Monday through Thursday, she shuttles up and down the road linking Arcadia and Bowling Green, taking students through the paces of introductory biology, microbiology, and anatomy courses.

For Dr. Cover, there have been two passions in her life: biology and teaching it to students eager for careers in the life sciences—the first passion started early for her.

“I guess you can say I was born to be a biologist,” Dr. Cover said. “My mom tells the story of me at 3-year-old dragging home a dead bird and asking her to explain its parts to me.”

Putting her childhood story into the language of a scientist, Dr. Cover said, “I was genetically programed to be a biologist.”

Dr. Cover plays a vital role in the lives of SFSC students living in the two rural, sparsely settled counties that, along with the more densely populated Highlands County, comprise the college’s service district. She is the only source of college-level biology and anatomy instruction for students working toward a degree.

Without Dr. Cover playing the gypsy biologist, students looking to get the science credits they need to begin careers in the health sciences or technology, would have to travel to the Highlands Campus.

Her fascination with one dead bird was just the beginning of life devoted to biology.

“As I got into high school, I knew with absolute certainly my academic path lay with the sciences,” Dr. Cover said. “I just had a love and a singular interest for my biology and chemistry classes.”

After graduating from high school in her hometown of Beaumont, Texas, Dr. Cover remained close to home. She worked toward completing bachelors’ degrees in biology and chemistry at Lamar University, only a few miles from home. Immediately after earning her degrees, she enrolled in Lamar’s graduate school, earning a master’s degree in biology.

At this juncture in her academic journey, Dr. Cover had settled on field biology, particularly limnology, or the biology of fresh water species. She moved to Oklahoma State University for her doctoral studies because it was one of the few universities to place an emphasis field biology.

Like most academic biologists, Dr. Cover thought her career would revolve around research. Indeed, in its early stages, her work centered on studying the effect of pollution on freshwater species and disease resistance in cotton. But Dr. Cover discovered she took special pleasure from teaching biology to undergraduates, a task typically assigned to young researchers like her.

But research funding soon dried up and Dr. Cover opted to teach full time. “I sent out 60 or more resumes and the only college that offered me a job was Florida Keys Community College, so, of course, I moved to the Keys,” she recalled to her own laughter.

What followed was a near three-decade span of teaching biology to students in the Keys, at what is now State College of Florida, Manatee-Sarasota, at a school of natural medicine, and her alma mater, Lamar. Through the years, Dr. Cover discovered her passion for biology also extended to opening young minds to its wonders.

Throughout those years, though, SFSC was on Dr. Cover’s radar screen. “Everything I had heard about SFSC was good—that it was a student-oriented institution, which is something that appeals to me.” She said she applied for teaching positions but that SFSC never bit.

In 2011, she sent in another resume and got the answer she had been waiting for. SFSC needed a biologist who was willing to work at its campuses in DeSoto and Hardee counties and was willing to drive the 30 miles back and forth between them.

“For me it’s an absolute pleasure doing my gypsy biologist thing,” Dr. Cover said. “The students I teach in DeSoto and Hardee stand out for their willingness to learn—they just try harder and seem to care more because they know it matters more to them, very much unlike students from more affluent areas.”

For the past 30 years, Dr. Cover has focused on her zeal for teaching but she never lost her love for research.

“With a stream of funding for the sciences coming to SFSC from a newly awarded grant, I’m aiming to work with my students to show them biology in action, not just from a textbook,” she said.

Dr. Cover sees opportunities to get students working on projects growing tissue cultures and genetics, all geared toward agricultural-oriented research.

The gypsy biologist calls Zolfo Springs, in Hardee County, home, where she lives with her beloved dog Biscuit. When not tending to her dog, Dr. Cover said she also enjoys reading, especially, naturally enough, science-related literature.

Dr. Cover said she’s a big booster of the DeSoto County Relay for Life cancer walk and she sits on the board of directors for the ARC Desoto, a nonprofit that aids residents with developmental disabilities.

“As much I love science I do have a softer side,” Dr. Cover said wryly. “I am also a big fan of horror films, especially movies about Frankenstein.”