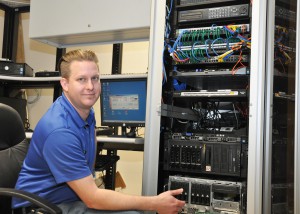 Protasio at work in front of the server rack at the city of Sebring.

He recalled a job interview he said was easily one of the most nerve-wracking he’d been through.

“Before the interview could start, they left me in a room with a desktop computer that wasn’t functioning,” said Protasio. “To get interviewed, I had to get into the machine, check the boards, and have it up and running—something I’d never heard done in an interview.”

Protasio found the problem, passed muster in the interview, and said he has settled into a job that’s right for him—one where he can use the skills he honed at SFSC.

In the two-semester course, Bohlman takes students through the paces of how to penetrate, test, and exploit connected computer systems so that they learn how to prevent hacking once they’re on the job.

“Bohlman showed us the tools we can use to beat back the threats that are out there,” Protasio said. “I learned what malicious actors are really capable of doing to a network I would one day manage.”

Protasio said he has put those skills to work looking for vulnerabilities in protecting the city’s network, one that sees traffic from the public looking to access everyday services, like taking care of their utility bills.

Protasio didn’t come to computing as a novice when he started at SFSC. The United States Navy veteran did a four-year stint handling cryptology and satellite communications. He joined the Navy in Guam, the U.S. territory in the western Pacific, where he was born and raised. The island was occupied by the Japanese in World War II and liberated by the U.S. in the Battle of Guam.

“Guam was a beautiful, almost idyllic place to grow up,” Protasio said. “You could almost say it was miniature version of Hawaii.”

After his discharge, Protasio stepped away from working in technology. He moved to Highlands County, where his family had relocated from Guam.

“In a complete switch from what I did in the Navy, I started working in the restaurant industry,” he said. “For the next 10 years, I worked my way up from server to management.”

In that time, Protasio started a family, but the vagaries of restaurant hours caused a strain, keeping him away from his son. Using his veterans benefits, he decided to register’s for SFSC’s networking program and complete it as fast as he could.

“I took a full load and took summer courses, too,” he said. “I finished up so fast I sort of get whiplash looking back at my time on the SFSC Highlands Campus.”

He said he learned invaluable on-the-job skills through an internship arranged by SFSC. “We went out to the airport and, working with a new enterprise, put down cables and set up a network,” Protasio said. “Those are essential real-world skills that are difficult to master in a classroom.”

Protasio heaped praise on his instructor, Bohlman. “He’s someone just like me, someone who worked his way up the restaurant industry but is now in academia,” he said. “He knows what it’s like to work in one sector and move to another—he gets the real world and is more of a mentor to me that he realizes.”

Protasio was so taken with learning the darker side of computing, he decided to return to SFSC for more. “I’ve gone back to the SFSC Highlands Campus and started the Digital Forensics program,” he said.

SFSC offers a college credit certificate in Digital Forensics that students can complete in less than a year. Students learn investigative techniques to recover and examine trace material found in digital devices, such as computers and cellular phones, often as part of a crime, corporate investigation, or to analyze unauthorized network intrusion.

As a student who started college as an adult, Protasio said he felt at home at SFSC. “I was prepared to be surrounded by a lot of people younger than me,” he said. “There were plenty of them, but you’ll also sit next to someone in class who’s older than you—there’s a place for everyone.”