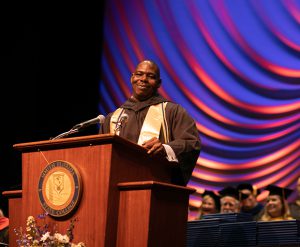 AVON PARK, Fla.–May 8, 2019–SFSC marked the end of the 2018-19 academic year with its spring Commencement held in two ceremonies on Tuesday, May 7, in the SFSC Alan Jay Wildstein Center for the Performing Arts on the Highlands Campus in Avon Park.

Honored during the 7:45 p.m. ceremony were those earning the Bachelor of Science in Elementary Education (BSEE) and the Associate in Arts.

In all, 351 students crossed the stage wearing academic regalia adorned with an assortment of colored cords and sashes signifying individual achievement.

Opening the ceremonies, Tami Cullens, chair of the SFSC District Board of Trustees said to the graduates, “South Florida State College has provided you with some of the most transformative experiences you may ever have and, surely, will never forget. SFSC is a place that has changed your life and those around you forever.” 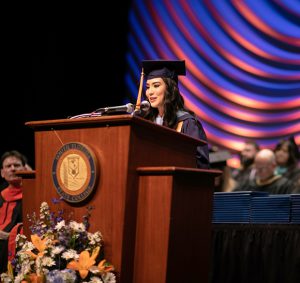 Mishel Mandujano Manriquez came to the United States from Mexico as a teenager, speaking not a word of English. She has earned her BSEE, graduating with a 4.0 GPA, and delivered the Commencement speech during the early ceremony. “I’d like people to take my story as an example that anything is possible if you really want it,” she said to fellow graduates. “It doesn’t matter where we come from, what we look like, or how many obstacles we have to face.

Remember, never take no for an answer, go out there and chase your dreams, because there is no limit to what you may become.”

The 7:45 p.m. ceremony featured Jocquas Walker as its speaker. Walker, who graduated with his AA, plans to continue his education and work toward a bachelor’s degree in criminal justice. At age 32, he suffered a stroke. Speaking to the graduates, he said, “If you learn anything from my story, be open to new people who add a piece of wood to the fire inside you. Don’t be afraid of vulnerability, because weakness provides an opportunity to develop and rebuild strength. Even if life presents you with unfortunate circumstances, standing in faith and considering the things we have overcome in the past, our tests should prove that we are built for this journey called life. In the words of Optimus Prime from ‘The Transformers’: ‘Let’s roll out!’” Walker garnered two standing ovations.

Earlier in the ceremonies, Dr. Thomas Leitzel, SFSC president, addressed the graduates: “In 2013, a tattoo of a semicolon became fairly popular. The semicolon stands for something unfinished in a sentence. It, literally, means ‘get ready, something else is coming.’ For our graduates, the semicolon is a reminder that your story does not stop tonight. Your story and your impact in our regional and global community continues.”

Dr. Leitzel also acknowledged the upcoming retirements of Dr. Christopher McConnell, professor of biology; Dr. Kristina Lewis, professor of English; Dr. Cherie Stevens, professor of computer science; and Enrique Ramos, professor of tutoring and learning. They were each recognized for their long years of service to students and SFSC.