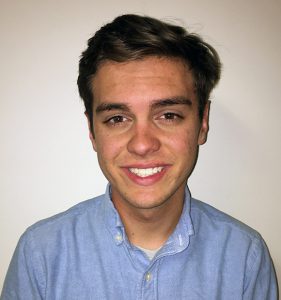 When the Discovery Channel was in search of local college students to become production assistants for one day, Nathan Wilson was on it.

“I want to go into marketing, so I’m interested in anything to do with film and advertising,” he said. “I’d never done anything in production, and it would be working with the Discovery Channel.” Wilson is majoring in business administration at South Florida State College and after graduation in December 2018, plans to work toward a bachelor’s degree in marketing at Florida Gulf Coast University.

The Discovery Channel was producing a digital documentary mini-series called “In the Pit,” specifically, for its Discovery GO app. The series, which launches on the app in April or May, will spotlight racecar drivers and their pit crews and features three racing venues across the country, including the Sebring International Raceway. Production in Sebring took place on Feb. 22.

According to Wilson, the Discovery Channel production crew focused on every aspect of a race team including team managers, drivers, engineers, and mechanics. During filming, the race teams were doing test drives, rather than racing.

Alyssa Wilson, production coordinator with the Discovery Channel, said that when she was looking for student production assistants, she needed someone who knows the area and is passionate and eager to learn. “As a production crew, we were only going to be in town for a short period,” she said. “We needed someone to give us insight into the town. We were coming from New York City, so we were coming there blindly.”

“As production assistant, they gave me some brief job descriptions,” Nathan Wilson said. “It was more like ‘Here’s what we’re going to do, but we’re going to play it by ear.’ They hadn’t seen the track at Sebring International Raceway in advance, so they just wanted to be open to changes.”

“Apparently, the Sebring International Raceway is known as a particularly difficult track because it’s bumpy, the road surfaces are half in concrete and half in asphalt, and it’s not well lit,” he said. “It’s because it was once an airfield.” 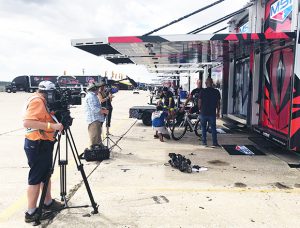 Wilson’s day with the Discovery Channel crew began at 6:15 a.m. “As a production assistant, I worked with cameras, lighting, and sound,” he said.

Wilson said that he loved everything about production—being behind the camera, the ins and outs of filming, the sound. He was particularly impressed with the producer. “Her name was Denise. She’s very experienced. She’s got a great eye and has an eye for themes that other people may not. Because of that, the crew used multiple [stabilized, handheld] Osmos cameras that can attach to a phone and create what looks like homemade video. They had GoPro cameras attached to bikes and the racecars. The producer had a good sense of the story.”

Not only did Wilson learn more about production cameras and sound, he learned about racecars as well as the physical and mental preparation that racecar drivers endure. “Some of them are racing for ten or 12 hours at a stretch. You have to have mental strength to be in a car for long periods of time and taking those extreme left turns. For part of their training, the race team would bicycle around the track to keep physically active and loose, just like any athlete.”

Wilson has more production work on his agenda. “I have a job with Mad Media as a production assistant during SFSC’s Spring Break, March 13-18. Mad Media specializes in X-games films. So, they’re filming a lot of the races, cars, race teams, drivers at Sebring International Raceway. But I don’t know how different it will be from the Discovery Channel’s film.”

The production experience with the Discovery Channel, clearly, sparked an interest in Wilson. “You can read something in a textbook, but to live it in the trenches makes it more real. It’s also super rewarding. Rather than take a test about a piece of equipment, you can actually use that equipment. If the Discovery Channel called again, I’d definitely do it.”